Change We Can’t Believe In: Whither Grindcore in an Era of Hope? 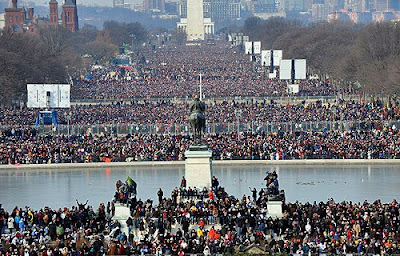 Like any other sane person here in the magic kingdom of DeeCee, I celebrated Barack Obama’s historic inauguration by staying the fuck out of the city.
It’s not that I wasn’t feeling the hope or the change or the changing hope or the hoping change or whatever it was we were celebrating. Hell, despite my reservations about Biden and the most egregious aspects of the drug war he authored, I voted for Obama. (That’s partly thanks to the Greens and Libertarians coughing up two candidates who were so completely antithetical to each party’s stated philosophy that I had no choice but to vote for a major party candidate for the first time in my life.) And if he accomplishes nothing else I’ll raise a toast to Obama for fucking over those goddamned Baby Boomers who have ruined every election in my adult life by turning it into a pointless circle jerk about who did what way back in the ’60s rather than actually leading the country.
No, my reason for skipping the downtown festivities was far more practical. I didn’t feel like being hassled by the Capitol Police when I inevitably kicked some fat Midwestern tourist in a fanny pack and a souvenir FBI shirt down the stairs for violating the Metro’s escalator rules.
So spending a frigid Tuesday watching the inauguration from the warmth and comfort of my couch left me plenty of time to ponder the new era in Washington. Actually, I spent a good bit of time considering that hoary punk and metal truism that Republican administrations make for the best musical inspiration. Even a cursory survey of my music shelf reminded me of the difficulty even some top flight bands had adjusting to the post-Reagan/Thatcher/Cold War era when easy enemies were scarce.
So I started asking some of my favorite political grind frontmen whether they have any concerns about their job security in this new era of hope.
“I don't think it makes much difference,” Bloody Phoenix/ex-Excruciating Terror guitarist Jerry Flores said. “Doesn't matter what party is in office. Look at the Clinton years: plenty of angry bands surfaced during that era. Republicans just make easier targets. Poverty, corruption, etc. It fuels the fire. It's not going to go away. Our problems haven't gone away.”

While Richard Johnson has generally shied away from being overtly political with Drugs of Faith (though they did slap Dubya’s mug on their self-titled EP, a trend I am glad to see peter out),he penned some classic diatribes with drum machine progenitors Enemy Soil back when Bush Sr. was the one leading the ill-conceived Middle East excursions.
And though he may be relieved Sarah Palin is not one geriatric heartbeat away from starting all out nuclear war with Paraguay, Johnson said he will not be letting the ascendant Democrats off the hook so easily either.
“I think the left is resting on its laurels now and it's a grave mistake,” he said. “We are not in a post-race world. And while it is a huge change having Obama in the White House in some areas, and I'm very happy about those aspects of his presidency (global gag rule, fuel economy, Guantanamo, talks with Iran, et cetera), in other areas, nothing has changed at all.”The kind of change Johnson said Obama doesn’t seem to believe in: Bush and Cheney in orange jumpsuits at Leavenworth for shitting on the Constitution, an immediate end to America’s entanglements in foreign wars – including Afghanistan – and Nancy Pelosi or Harry Reid pulling their noses out of the latest Rasmussen poll and spontaneously developing functioning vertebrae.
“While I'm ecstatic that McCain didn't get in, I didn't vote for Obama,” Johnson said. “I voted for Nader. As a matter of fact, I voted independent or green only from president down to local school board.”
Which raises a good point: even if you skip the presidential side show, vote your local races. Seriously, that’s where the worst shit that will fuck up your life goes down and since turnout and participation are historically so low for local races, a small, concerted group (*cough* whackjob godbotherers *cough*) can easily sway the vote and before you know it your school kids are being led in unconstitutional school prayer and being taught that unsubstantiated bullshit like intelligent design is just as valid as the theory of evolution. 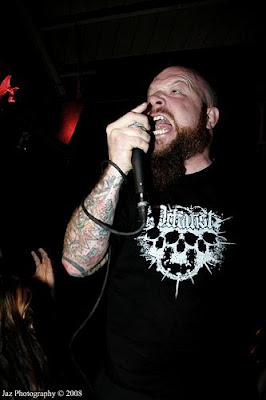 “Corruption never sleeps,” Kill the Client’s Champ Morgan said. And if you worry changing the drapes in the West Wing means Texas’ finest’s will lack for inspiration, rest easy. Morgan’s libertarian leanings leave him equally dissatisfied with both the conventional left and right.
“Things here are fucked up,” Morgan said. “You cut off the head of the hydra and two more appear. The once greatest country in the world is up to our eyeballs in debt, education and health care barely exist, and we take another goose step towards the police state every day.”
Cynically confident in the fallibility of human nature, Kill the Client will not starve for inspiration regardless of how squeaky clean the current POTUS seems.
“Until the government is dismantled and control is put back in the hands of the people, we will not be truly free,” Morgan said. “There will always be material and inspiration out there. You just may have to dig past the surface to see it.”
Now that’s no change we can believe in.
Posted by Andrew Childers at 8:57 AM

Finally someone who agrees with me about hardcore/metal still having material to write about without Bush! If only more bands sang about or focused on the shit going down in their city or town instead of "trying" to save the whole world then maybe our hardcore/metal community could get more done.

And yes, the stuff made during Bush's presidency was becoming quite boring and unoriginal. This