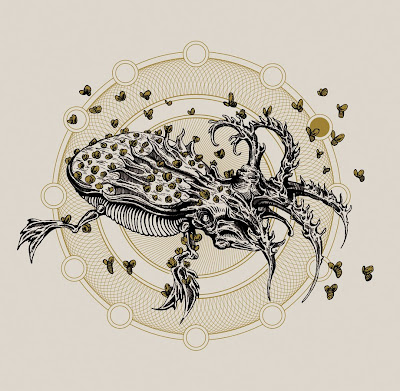 Dephosphorus/Great Falls
Split
Hell Comes Home
Apparently Dephosphorus are gonna keep dribbling out new music in spurts until your balls are swollen and cerulean in anticipation for Night Sky Transform. Here's one more astrogrind tune to keep you primed.
Unlike the comparatively pithy pack of songs they gave us on the Wake split, Dephosphorus go long with “Stargazing and Violence.” The lengthiest song in their repertoire to date, Dephosphorus had me worried at first because the first 30 seconds of the nearly four minute tune is spent beating to death one stomping riff. I’d feared the Greeks may have lost their touch, but then “Stargazing and Violence” supernovas into crystalline black metal spidering. That gets blended with blastbeat urgency and guitarist Thanos Mantas' constantly shifting musical architecture that manages to bleed psychedlic swirls, shrill thrashings and downtempo introspection into a single protean tune. The one real misstep to the song are some really sour clean vocals at the midpoint, but they’re mercifully short and then erupt to one of drummer Nikos Megariotis' finest blastbeat moments, a snare rolling snap that reminds of me of Kataklysm’s Max Duhamel at his best. “Stargazing and Violence” is only one song and one with some admittedly awkward components, but it shows once again how fearless Dephosphorus can be. They take a lot of chances here and most of them pay off. I've heard the ambitious Night Sky Transform and this actually serves as a nice Rosetta stone to decrypt Dephosphorus' evolution since Axiom.
Along for the ride is Great Falls, which features of Shane Mehling of Playing Enemy/excoriating album review fame. Like Mehling’s prior outfit, Great Falls dabble in aslant noise rock on “Everything But Lightning.” The nimble song refuses to walk a straight line when it could parkour its way up a wall instead. It could be my love for Playing Enemy clouding my judgment, but I kept waiting for that spinal compression beat down to kick in and it never came. Playing Enemy songs, no matter how convoluted, always found a way to circle back around to jack you in the chicklets and it didn’t happen here. It’s hard to judge a band by one song, but I missed that moment when the riffs click into something monstrous. However, I’d definitely be interested in hearing more.
On the physical front, Hell Comes Home have done with a fantastic job with the packaging, including that face only Mama Cthulhu could love. And for those of you who haven’t given in to the seduction of the needle, the 7-inch also includes a free download.


all seriousness, the Dephosphorus side sounds really interesting, can't wait to hear it... along with somehting else.

That cover art is part of a series or something, right? I've seen a ton of covers that have that "bug inside some rings on a white background" theme.

I think they're cool.

As much as I love Deph, I may give this a pass since it's just one song and the other half doesn't sound promising at all.

Bill: Stream it and see if you like it, and just buy the digital track if you don't want to chance the other half. http://hellcomeshome.bandcamp.com/track/stargazing-and-violence