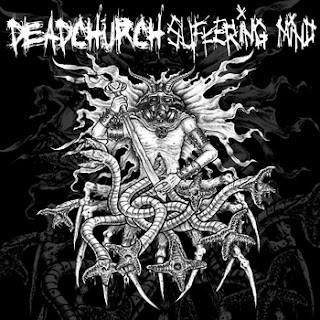 Dead Church/Suffering  Mind
Split
7 Degrees
So I says to myself, "Self, bands like Dead Church are the reason you keep getting out of bed in the morning. The song 'I Want Nothing" has everything you ask from a gloriously grisly grind tune. This Michigan quartet sounds like somebody royally pissed off the G'mork from The Neverending Story and if you come any closer he'll rip you to shreds. Self," I said, "Dead Church pack an insane amount of aggression into a miserly 56 seconds of minigun guitars and skull thumping drums that crash and careen like a room of ADHD toddlers on a Red Bull binge. For as short as the song is, Dead Church manage to cram in several distinct movements, stuffing less than a minute full of variety that never slacks off on the attitude. Self," I said, "'I Want Nothing' is a practically perfect grind song. What more could I possibly ask from?"
"Flip the fucking record over, asshole," Self said.
"Holy fucking shit, Self, Suffering Mind are at the absolute apex of their powers. 'War Street/Wall Street' is like the very essence of the Polish band distilled down to concentrated hatred. Dead Church are fan-fucking-tastic, but Suffering Mind probably turned in the sharpest 54 seconds of their keenly honed career. You hear that, Self? That is the sound of inevitability crashing down on your dimpled dome. It's the concerted evil of the world being barfed back on society, a putrid bile melange of everything venal, corrupt and compromised. It's the hatred slime from Ghostbusters 2 turned into weaponized audio.
"My only complaint, Self," I said, "is what the fuck is up with just a single song from each band on this 5-inch EP. Because this blue ball tingler demands a full release."
For once, myself and I agreed.

[Full disclosure: the label sent me a review copy.]
Posted by Andrew Childers at 2:45 PM

Dead Church is actually a four-piece. :) Just a heads up.

you are correct, sir. i lost somebody somewhere counting names in the liner notes. thanks for point that out. it's been fixed.