Next on the Agenda: Pete Benumb Back with New Band 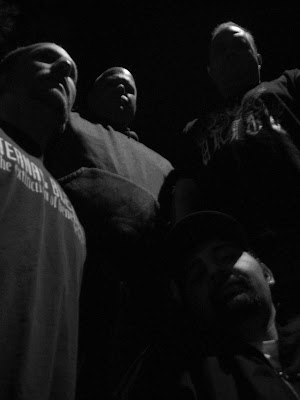 When last we heard from Pete Pontikoff, he regaled us with tales of his time in Iraq, but on the musical front, the mighty Benumb had called it a day and his latest outing, Agenda of Swine, had yet to find a label home.
Fast forward about six months and Agenda of Swine are about to drop their debut album for Relapse, home to Pontikoff’s last collective of musical miscreants.
“Agenda signed to Relapse! Major sweat off my brow,” Pontikoff said when we checked in. “We just finished recording and submitted additional tracks to Relapse to add to what we already have to make a full length. Title will be Waves of Human Suffering.” The lone, self titled track on the band’s MySpace page is a longer, thrashier outing than you might expect from the participants’ past work. Clearly, these guys are not content to rehash the past and are crafting a new identity for the new project.
“As far as Benumb/VP 2.0 [Vulgar Pigeons, the band started by Pontikoff’s bro, Paul, and Benumb/Swine drummer John Gotelli], yeah, we might have a little similarity (same members thing), but there’s far more time put into this were looking at twelve songs over the last two years. We really didn’t rush and tried to weed out the stuff that was too VP/Benumb. Still fast.”
How about Pontikoff’s contribution, when last he graced us with a full length, 2004’s By Means of Upheaval, he had swapped out his roar for more of a hardcore style bark, one that unfortunately, could stray into the monotonous if you weren’t mentally prepped for it.
“Vocally, I leaned more on Jeff [Lenarmond, guitarist] to show me how to do new stuff, might not be new to the world but new to me. I really tried to just to make the vocals good with the help of those around me lets make no mistake. No don’t worry no more Upheaval. If it sounds anything like Upheaval to you, I will quit.”
(Lately, I’ve been spinning it and loving it, so go figure.)
Given they are clearly moving forward musically, how should we address Mr. Pontikoff, who worked under the nom de grind Pete Benumb for the better part of the last decade.”
“Pete 2.0 would be just fine lol! Just kidding. Pete Benumb is awesome.”
Posted by Andrew Childers at 4:35 PM

Pete and John are total class guys. Paul too. I'm sure Jeff is the same. This is one record I am looking forward to hearing this year. Always been a fan of Benumb and Vulgar Pigeons from the beginning.