Tickets to the Car Crash 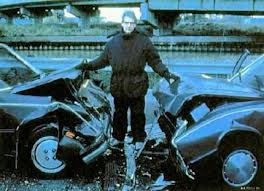 Pig Destroyer's first album in five years has routinely been the most anticipated grind record of the year for about the past three years as it continually kept getting pushed back and postponed. But when the band finally put Book Burner in our hands we were left with ... this. I've never before checked my watch in boredom waiting for a Pig Destroyer album to be over. Ever. That just happened with Book Burner.
While I was certainly disappointed, I'm surprised at how quickly the consensus seems to have emerged that Book Burner kinda sucks. I'm just now emerging from my self-imposed media blackout on this (still haven't bothered to watch more than 5 seconds of that awful monkey video). So I've been cocooned for weeks so my impressions wouldn't be tainted by the conventional wisdom.
But given the emotions I've invested in Pig Destroyer over the years, I'm still trying to discern exactly how the disappointment happened. I know that I don't like it, but I'm still trying to discern the why. So I'm opening the floor to theories both here and [shameless plug following] G&P's new Facebook page (where you can be subjected to even more grind-related ramblings that don't even rate blogging)[/shameless plug].
So it's time to play (psycho)pathologist...what went wrong and how does Pig Destroyer get themselves back on track? The floor is yours.
Posted by Andrew Childers at 6:48 PM

i think the reason people get so excited is that this band is a lot like refused. they are the hardcore band that people who aren't into hardcore like. the shape of punk to come is the bitches brew of hardcore, not the coleman record that is a challenging listen.

so pig destroyer is the grind band that people who dont listen to grind listen to. people can argue about this but ill be listening to sixbrewbantha alone. forever alone.

I was disappointed to read about how unimpressed you were with this album, then surprised to see the number of agreed responses. I don't get it - I think I'm pondering the exact opposite of you, searching for what I'm missing in the album that everyone else finds to be so disappointing and mediocre. It's exactly what I was hoping for from them. Here is what I can come up with, I think the "lifeless" drumming is more accountable to the production than the style - To me it sounds almost identical to the drum machine on 'Agorapocalypse', but then again he was playing over already programmed drums, not leaving much room for fills or freestyle. Perhaps that so-called missing 'primal intensity' can also be blamed on the clean production. There is also an obvious lack of the usual desperation in J.R.'s vocal stylings this time around, almost maintaining a still glorious, though somewhat monotone snarl throughout a majority of the album. I can understand the head scratching to all of that, but you speak of an absence of signature riffs, what about that trademark PxDx disorientation during the entire 'Iron Drunk' track, or (in the vein of 'Carrion Fairy's Slayer worship) the first minute and a half of 'Permanent Funeral'? 'Sis' sounds like it could have been written for the original 'Explosions In Ward 6'. I could go on track for track but nobody wants to read my inane babble for that long and if you don't hear it by now maybe I'm the one that's screwed up. To me it's the ol' fifth album template - the sound of their entire career congealed into one album, and it works. Here's what I think, the reason it would seem alot of folks are disappointed with this disc is because A: It's been a long time coming, and despite being "open minded" or self-proclaimed music snobs, people built this album up whether they realized it or not. B: This band has made a serious mark in the scene - and everyone is going to compare every release after 2001 to 'Prowler In the Yard', and that's damn unfortunate, because if this were their first album these people would be putting it on a pedestal. C: Because they've made such a mark in the scene they suffer from the countless legions of mediocre bands trying to sound like them severely watering down the genre. Step away from it for five years and some change and all of a sudden you find yourself facing a decision musically: Either just get in there and do what it is you do best, hoping it will still stand above the second generation sound you've helped inspire, or possibly step out of your comfort zone and do something different in an effort to raise the bar yet again, but with that risk alienating your fans. I'm glad they chose the former, at least this time around - even though people think it sounds like an "average Relapse grind record" (because half of that label's roster have borrowed from PD's catalogue). I think with what they went through we're all lucky to even have a new Pig Destroyer record, and all really lucky they didn't continue down the path of critic's boners for 'Phantom Limb' lean even more heavily on boring thrash stylings. They did what they needed to do and made an all encompassing album of their sound just to get their feet back on the ground. At the risk of sounding like a COMPLETE asshole, I think we all need to comb thru our Grind collections at home and throw away anything that isn't elite - a genre with this narrow of boundaries shouldn't be diluted with second rate garbage, listening to a band like Noisear to tame that DA fix is the same as listening to Godsmack for the nostalgia of Alice In Chains. You'll spot and appreciate the good stuff easier that way....whoa, I blacked out for a few minutes there.

kevin: i think people like pitchfork are writing for the crowd that only buys one grind record a year. if that's you, this might blow you away.

pj: please god start blogging more. we may completely disagree on this one, but that's one kickass defense of book burner. i still feel like the album sounds like a band that's a bit at a loss for where they want to go. but it's awesome to see people clearly articulate their thoughts the way you did.

I just want to chime in that just because a band's last album was successful, and they happen to represent a pinnacle to some people, doesn't mean that when they produce something mediocre by their own standards, that we should accept it. I don't know about everyone here, but, for the most part, I listen to the mediocre albums I hear once and let them go, so this goes in the same category. I find that if I try and force myself to like an album just because common knowledge states that I'm being snobbish, it doesn't end well. I tried to be ok with phantom limb, but ultimately despite some good song writing, everything has been going slowly downhill, at least in my perception. I'm not saying we should be fickle, but do you really want to be the person that's still listening to Mastodon, trying deperately to choke down the shit sandwich that is "The Hunter", just because you don't want to be a hipster by claiming you only like remission?

Anyway, my favorite album of their's is terrifyer, so its not like Iike I'm against their sound progressing. I think, as far as the clean sound goes, I've noticed in my own work that the more audio work I do, and the more I know about it, the more difficult it gets to create rough sounding records. I almost feel like if I threw an overdrive on these recordings, I'd like them better.

To me the band sounds bored, like they're playing these songs while lounging on the couch. I just listened to "Sis" followed by "Towering Flesh," and the difference in energy and attitude is night and day.

How to fix it? Get the band pissed off again, and give the drummer a freaking cup of coffee.

I can't understand why any fan of Pig Destroyer would not like this album. They are one of my favorite bands and they did not disappoint. The drumming may be machine-like but it's good drumming nonetheless. I'll agree the production might be a little too pristine and maybe that's what's taking the intensity out of the listening experience but for me there's not a dull moment on the record. Ton's of great riffs, probably more usage of blast beats then on previous records and I like the way the vocals have some rawness to them. The guest appearances from Kat Katz are a nice bonus. I had high expectations for this record and those expectations were met. It's not like their doing ballads and clean singing, still sounds like the same old pig destroyer to me. I expect them to wow me again on the next one. Maybe some people just hold them to higher standard because of the landmark albums they've put out.

It has a lot less to do with whether you're a "fan of Pig Destroyer" than if you're a fan of grindcore as a whole (and not the Relapse-ized concept that there are a few "good" grindcore bands that are watered down enough to pass muster). Measuring a band against its own output counts for something, but it's important to also frame it independent of its pedigree. Does it stack up against the standard that has been set for what well-executed grindcore should and does sound like? It could be argued that great records are peerless, but does any excellent record in the same style make the same choices that it makes? This simply isn't what good grindcore sounds like, and if we want to argue that by now Pig Destroyer have fully transitioned into another genre, stronger signifiers need to be in place to suggest what genre that might be (and if you simply say "metal," I'll throttle you).

So basically Book Burner is kind of the litmus test for whether you are some rigid grind-purist or just someone who just likes extreme metal. I guess you could say BB isn't 'real' grind because it's catchy and easy to listen to, but you cannot tell me its not well executed. We'll always have our Gridlinks, Phobia's and Wormrots for the more traditional grind-style, so can't we just enjoy the other stuff for what it is?

i'm the farthest thing from a grind purist. i'm a damn grind slut. i'm glad you got something of it, but i found it tired, boring and uninspired.

I think this is more of a litmus test on listening. I don't feel that Gridlink, new Phobia, or Wormrot are traditional grind if you have been into it for more than a few years (I'm not an ageist, but these are new school bands/records that hit my "meh" spot dead on). Its not well executed because holy shit those drums sound terrible, lyrics are pedestrian, and cool riffs played for too long do not a good song make. This is all just opinion, but I think your time is better spent listening to rad young bands doing sweet shit like Cloud Rat or Sixbrewbantha...or older bands like Gride or Kill The Client that are still...killing it.

And I am a grind purist...albeit open minded. Obviously you're not wrong...you just have a different opinion.

Still, if you brought any Pig Destroyer record to a record listening party...you'd go first or not at all.

"Still, if you brought any Pig Destroyer record to a record listening party...you'd go first or not at all."