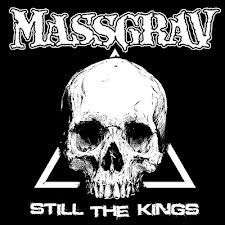 Massgrav
Still the Kings
Selfmadegod
Massgrav toss down the gauntlet to all comers with a simple warning: watch the throne, motherfuckers. The Swedish blastcore kill crew annihilate 19 songs in 18 minutes as they defend their blastbeaten crust punk throne.  Anybody who is the least bit familiar with Massgrav's M.O. already knows that Still the Kings will not be larded down with a single superfluous note, ambient digression or arty farty passage. Instead, this is the sound of pretty much every Swedish d-beat great tossed into a blender set to liquefy. At their most sedate, as with "Brallorna nere igen," Massgrav are still zapping along at clip that would get the skate park popping.
There can be a samey-ness that creeps into Massgrav's sound, but when they hit it and quit in about a quarter of an hour that's a pretty secondary complaint. As one record executive famously said of the Ramones: he would have walked out of their audition but they were done before he could get up. Massgrav probably recognize this so they do break up their punk beatings with the occasional flourish like the minced guitar solo of "Kom ihåg vad du rösta på" in a nod to actually telling the songs apart.
This is the kind of record you reach for when you just want a jolt of pure adrenaline without recourse to subtlety or pretense. Sometimes you just wanna thrash and when you do Massgrav are still the kings.

[Full disclosure: Selfmadegod sent me a download.]
Posted by Andrew Childers at 8:28 AM

Labels: crust punk, how swede it is, massgrav, reviews, selfmadegod, still the kings

Killer album by, probably, the best fastcore band out there. The production and the songwritings are as always with this band way ahead of the rest of the bands in this genre. My favorite album of 2012!
Chris D.