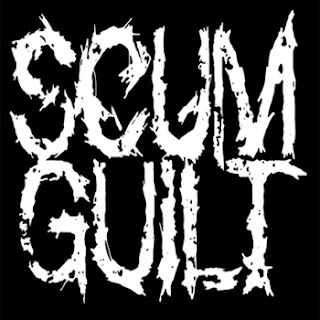 Scum Guilt
Enslaved
Grindcore Karaoke/Mannequin Rein
Scum Guilt are exquisite technicians. I don’t mean they’ve spent long hours mastering obscure scales and modes in the name of pointless fretboard wankery. Rather, Scum Guilt show a flair for the very difficult art of composition. Over eight original songs (and a Napalm Death exclamation point), Enslaved takes unrelenting pounding and through sheer repetition and subtle mutation delivers a coherent musical experience that fully develops a single idea and shows it off in many different lights.
There’s nothing subtle about Enslaved: it aims to ram your head into the turnbuckle like you were some professional wrestling upstart taking a run at the title belt before you’ve really earned your shot. Scum Guilt show off the many moods of straight forward aggression, but from every angle their chunky grind hits like a battering ram. “Lung Ripper” takes things relatively slow, wearing you down with its implacable plod while “Gate Keeper” drills in like a diamond bit winding up to speed. The exemplary “Taxi Driver” takes what could have been a throwaway breakdown in any number of generic hardcore songs  and builds an architecture of complimentary moments around it until it’s a fully formed musical expression. But even amid the blunt force trauma, Scum Guilt have buried nuggets of careful composition. “No Trust” pulls a sneaky Discordance Axis trick of playing the blastbeats off of a slower tempo riff, creating dynamic tension in the song.
Scum Guilt can hold their own with the most aggression-focused of the their grindcore peers, but this band is already showing flashes of something more interesting going on behind their lashings. All of the elements are wonderfully familiar, but this is a band that knows how to keep the mix fresh. Of that, this scum is guilty as charged.
Posted by Andrew Childers at 6:29 PM