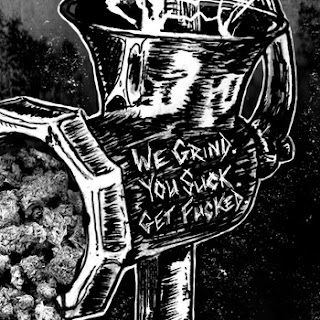 Occult 45
Grind the Lightning
Bandcamp
The law of the conservation of mass tells us that mass can neither be created destroyed, though it may change form over time. The grindcore corollary would be that a band's songs are neither created nor destroyed but simply change form when they're promoted from demo to album version. (The comedy corollary is I almost opened with the same Billy Dee Williams joke I used last time.)
Philly trio Occult 45 don't tempt the wrath of physics because they reduce, reuse and recycle all four songs from their Grind Funk Railroad demo for this eight song offering. The old songs aren't created or destroyed so much as festooned with a handful of new tunes that stripmine the narrow vein between Crom's sardonic Conan-core and Population Reduction's high resin thrash throwbacks.
That said, things get off to a worrisome start with the repetitive, overlong “Demonologist,” which takes the title phrase and rides rodeo on it for two minutes until it collapses exhausted. While the first track is the most egregious, it’s also indicative of the one area where Occult 45 repeatedly fall short. The album art boasts the motto “We Grind, You Suck, Get Fucked,” but there are too many times when I get restless waiting for the actual grind to kick in. Like the namesake its title apes, Grind the Lightning ultimately has more thrash in its soul than blastbeat. Occult 45 spend too much time – such as the lumbering (and grammatically worrisome) “The Farmers Daughter” – building up to an explosion that either comes too late or never comes at all. Bottom line, there are better bands to be found working a similar shtick (hello, Spewtilator) so it’s time for Occult 45 to step it and come hard with a batch of tunes that will separate themselves from an increasingly crowded pack.

[Full disclosure: the band sent me a download.]
Posted by Andrew Childers at 7:26 PM

I keep seeing this band playing on local shows, but I don't think I care enough at this point. Maybe they're a lot of fun live, though.