Blast(beat) From the Past: Exit Strategy 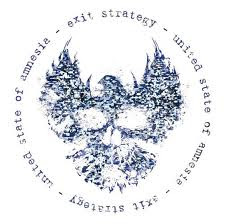 Exit Strategy
United State of Amnesia
Self Released
2008
Now I don't need some smug-ass Canuckle-head talking shit about the United States' backasswards invasion of Iraq just because their government had the good sense to politely decline their invitation to the Coalition of the Willing. If they lack the sack, then they can just go back to their socialized death panel health care system, their polite neighbors and a homicide rate only a third of America's. USA! USA! USA!
But I'll let my patriotic fervor pass when America's 51st state is handing out death-grind as good as Alberta's Exit Strategy. The quartet cluster bomb what's left of the United States' Bush-era dignity with nine death-grind cruise missiles in 37 minutes. Exit Strategy stitch together the best parts of Circle of Dead Children's glower and the doodlee-deedlee riffsplosions of Decapitated. Every so often they dredge up a smidgen of Burnt by the Sun playfulness or the occasional nod to Dying Fetus just to keep things interesting. Though their songs inherited their girth from the death metal side of the family (they're consistently in the three to four minute range, for all you ADHD types), they never seem to drag or lose pace. Instead, Exit Strategy constantly introduce a twisted bit of riffery or a kamikaze scream to keep your attention focused. They're not without the occasional misstep ("The Hand of Victory Holds the Pen of History" veers dangerously close to br00tal slamz territory before the blastbeats slash back in), but on the balance Exit Strategy keep the ship upright even if they're sticking pretty close to their forefathers' playbooks.
Now the snarky asshole American in me might want to know why a quartet of Canadians is so obsessed with the United States' international malfeasance (I'd suggest taking a look at your country's odious hate speech laws one day), but I also can't deny that many of their critiques are also spot on. "Just?" appropriates the pledge of allegiance, holding it up like a perverse funhouse mirror that throws into sharp relief the gulf between America's lofty rhetoric on freedom and human rights and its often compromised implementation.  While large chunks of United State of Amnesia seem to be frozen in the amber of a bygone era of hubristic mission accomplished banners and unknown unknowns, when you remember the current Hoper and Changer in Chief has arrogated the power to kill American citizens with virtually no judicial oversight, then suddenly Exit Strategy's criticisms don't seem so dated. Or so funny.
Posted by Andrew Childers at 5:44 PM

So I checked them out. Listened to 2-3 songs. They sure love their samples and cookie cutter part after part. My exit strategy was easy. Kill window.