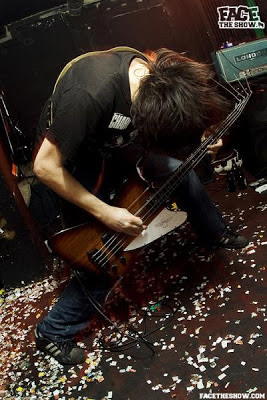 It's been a long seven years since Justification of Criminal Behaviour, but F.U.B.A.R. made it seem like time was flying this year when they dropped the absolutely crushing Lead Us to War. It's a Large Hadron Collider of an album that slams together particles of grindcore and power violence into a universe-shattering big bang of sonic violence. The band never intended to wait this long between albums, but it's a paltry price to pay for an album this crushing.
And it's not like F.U.B.A.R. have been sitting at home twiddling their thumbs for the better part of a decade either. The Dutch band has been steadily dropping split releases, jumping in the van for the occasional tour and generally just taking life as it comes.
"Well … working on a full length got pushed back a couple of times over the last years," bassist Bas said. "It seemed like there were always offers and ideas for split releases. We did a couple of  tours, some kids were born, some physical wear and tear here and there (we don’t get any younger you know). We had  some delay."
Part of the delay  was that F.U.B.A.R. make a clear distinction between how they write to fill a single side of a 7-inch and how they pace and plan a full length record. And anyone who's put on Lead Us to War will appreciate their thoughtfulness.
"To do splits is much easier," Bas said. "For a split 7-inch you need, well, five to seven songs. For a split LP you need 10 to 15 song. But for a full length you need up to 20 or 25 songs depending on the running time. Also we hold on to the belief that a 7-inch is meant for seven minutes of all or nothing. These songs are more easy to write compared to longer songs with different structures etc., which we think we need on a full length with a running time of, well, close to half an hour to keep things interesting."
The current crappy state of the world gave F.U.B.A.R. plenty of lyrical fodder to fill that half an hour as well, Bas said. While F.U.B.A.R.  plot firmly in the middle of the current wave of political grindcore, there's something about the way the band divvies up the lyrics between three vocalists that gives them an honesty and a sincerity that's lacking in a lot of other bands that puke out pro forma political rants.
Speaking of ranting: "We write about what keeps us busy, worries us, what makes our minds boil with rage and fury and make us spew our anger in big chucks to those who try to force their sugar coated happy colored lies and  hatred and prejudices down our throats every day in TV commercials, and happy faced game shows hosted by perfectly shaped females who try to sell us what we don’t need in the name of consumption and give insecure children a reason to start developing eating disorders, lying politicians, soap stars and other scum that should be dismantled," Bas said. "And we try to translate this into sound."
One of the things I love most about Lead Us to War is just how freaking gigantic it sounds. It's a throwback to the mid-90s when I was really getting into grind and bands like Phobia and Excruciating Terror were dropping albums with huge guitar tones. To get that titanic sound, F.U.B.A.R. turned to producer  J.B. Van der Wal, bassist for Dr. Doom, another band that knows something about sounding gigantic. Bas said F.U.B.A.R.  knew he would be someone who could make sure the album didn't come out "too controlled."
"We really wanted to record with JB," he said. "We  all know the productions JB did and,  we were looking forward to record with him. He does the job very well. [F.U.B.A.R.  vocalist] Luc is a good friend of JB, so it was an easy set up. The whole recording process was very relaxed. For us it could not have been better and were more than happy with the result. JB is a dude who knows his craft and knows how to make a record sound the way it should sound."
While seven years may have been a bit of a wait for Lead Us to War, Bas said the band is already working on follow up material, but nothing has been pinned down for sure yet. Until then, we'll just have to wait patiently to see where F.U.B.A.R. lead us next.
Posted by Andrew Childers at 7:58 PM