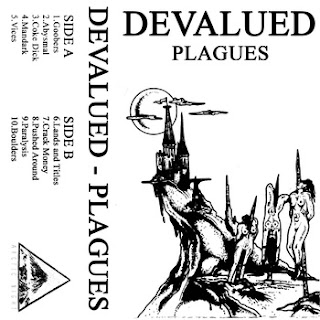 Devalued
Plagues
Bandcamp
I was never a skater--more of a bike guy, myself--but Devalued nail the vibe of the stuff my skater friends would toss on when they'd attempt to ollie park benches or grind the edge of a concrete flower planter. There's a crusty crossover vibe to the snarky sampled Plagues that sounds a tad like mid-era S.O.B. (though not as strong), but it drags me back to completely wasted summer days where I'm sure teenaged me would have embraced the notion that "This Town if Full of Goobers."
While I'm sure Devalued could soundtrack similar wasted days with your friends, when you sit down to listen to Plagues on its own, there's a monochromatic feel to the 10 songs that keep them from really reaching their potential. Just about everything cruises along at the same head nodding tempo without deviating too far into blastbeats or knuckle-dragging sludge (again, a nice skating tempo). So when Devalued do peel off the 54 seconds of blastbeats and Bill Murray snark that are "Coke Dick" or the resin-thick Sleep-gone-hardcore haze of "Mandark," it's a welcome diversion. But those two songs are back to back in the album's center so they're bookended by a bunch of songs that zip by without differentiating themselves from the pack. The real standout to the whole package though, is the judding bass, which pounds through songs with a nice, sludgy insistence.
If you've got an afternoon to kill and municipal infrastructure to grind, Plagues will set the right tone. But it works best as background music rather than the focal point of your attention.

[Full disclosure: the band sent me a download.]
Posted by Andrew Childers at 7:39 PM