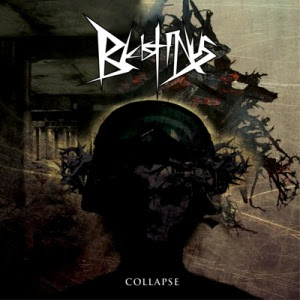 Blastanus
Collapse
Self Released
Blastanus sounds like it should be the title of some super-skeezy Eastern Bloc porn flick investigators would find n the VCR of Buffalo Bill's body part-strewn sex dungeon. Instead, this Finnish quintet (featuring a saxophonist) churn through death/grind that leans heavily on the balance of aggression and obsessive technicality established by the early Willowtip roster on this 2011 album. Comparisons to Decapitated would not  be far off either because Blastanus shove the guitar histrionics to the forefront for better or for worse.
Over 11 songs in just under 45 minutes, Blastanus's vocals veer between Afgrund rasping and Karl Sanders straining to drop a deuce after a Taco Bell binge, which puts the band squarely in the realm of metal's norms. The drums are afflicted by that modern typewriter rattle, but they serviceably move the songs forward. So make no mistake, this album belongs to guitarist Antii Oksanen. Where everyone else is turning in a by the books performance, Oksanen's florid freakout at least endeavors to give the band some personality outside of the zillions of other bands who have mastered odd scales. One note will never serve when he can squeeze in 50 and he takes full advantage of the range the full neck of his guitar offers. The solo of "Liberation/Salvation," one of the few really stand out moments on Collapse, is ganked straight from the Slayer playbook but given a skronkological rectal exam.
Blastanus spend about 90 percent of Collapse toiling to turn in a generic but inoffensive death/grind record, but then out of nowhere they tack some smooth jazz on to the end of the album. If you have a full time saxophonist in the band, it seems odd to keep him lurking around for one track just in case you were wondering what it would sound like if Kenny G ever went on tour with Sadis Euphoria. Nobody has ever wondered that.

[Full disclosure: the band sent me a download.]
Posted by Andrew Childers at 7:37 PM

I may go in for more death metal than a lot of folks who frequent this place (please don't yell at me Jon Chang).

I was expecting more Zornish crazy shit from the sax dude, but on the whole this is solid.