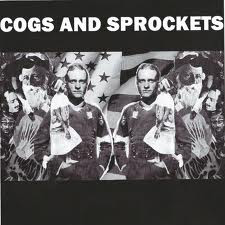 God Harvest/Cogs and  Sprockets
Split
Tack Head
We're riding the cusp of a glorious noisegrind renaissance as bands like thedowngoing and Water Torture lift and reinvigorate the blurring blasts of earliest Anal Cunt, select choices of the Gore Beyond Necropsy catalog and Insect Warfare's insane bubble gum pink final record to produce blown out white noise monstrosities  of ear stabbing abrasiveness that's extreme even by grindcore's antisocial standards.
Joining that elite cadre is the glowing nuclear crater left behind one man ICBM factory Cogs and Sprockets, who tortures man and machine alike in service of his irradiated song suites. It's all banshee wailing recitations of the world's myriad and most conspicuous failures punctuated by exclamation marks of screeching stop/start guitar protestations. The 7-inch's sleeve claims there are six separate songs on offering here, but that's like trying to count individual warheads when you're being clusterbombed. The Cogs and Sprockets side of this split proudly proclaims that "grindcore rears its ugly head" and this motherfucker delivers like FedEx. Meet your new favorite nightmare. 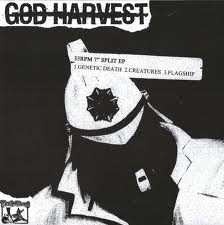 Flipside, Florida quintet God Harvest would be considered fleet-footed in any other context in which they were not in a police lineup with Cogs and Sprockets. Vocalist Tyler Toth was probably brushing drywall out of his chompers for a couple weeks after this recording session because he devours scenery like Al Pacino visiting the crystal meth factory on free sample day. His compelling delivery and phrasing have a shade of J.R. Hayes about them and that really gives God Harvest character. He's lucky because the musical elements of the band give him plenty to work with. God Harvest are not averse to occasionally slowing things down, cruising by to admire the carnage in their wake before flipping your twitching corpse the bird and stomping the gas again. That keeps their side consistently engrossing. God Harvest can hit you from a variety of angles but they really seem to love that sneak attack.

"The 7-inch's sleeve claims there are six separate songs on offering here, but that's like trying to count individual warheads when you're being clusterbombed."

Some of your finest prose.

Awesome split, and an awesome review. Not sure why but I never figured you would be the type to like Cogs and Sprockets, but glad you do.