They broke his shin bones and arms with an axe-hammer. Then they stripped him, and would flay him alive; but when they tried to take off the skin, they could not do it for the gush of blood. They took leather whips and flogged him for so long that the skin was as much taken off as if he had been flayed. Then they broke a piece of wood in his back until it broke, dragged him to a tree and hanged him; and then cut off his head and brought the body and head to a heap of stones and buried him there. All acknowledge, both enemies and friends, that no man in Norway, within memory of the living, was more gifted with perfections or more experience than Sigurd, but in some respects he was an unlucky man. 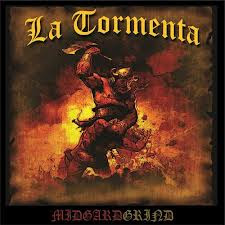 La Tormenta
Midgard Grind
Self Released
Midgard Grind is a bit like the Mr. Creosote of grindcore: it just sounds wafer thin. This South  American "grind viking core" band cobble together a 15 song grab bag of demo quality studio tracks and worse sounding live efforts that don't do their musical aspirations any favors because you can't decipher anything. The ranting German sample that introduces the record is the loudest thing to behold. I'm not saying every album needs to be pristine and soulless and overproduced (far from it), but it's nice when there's enough space in the mix between instruments that you can actually hear what's going on.
What you can occasionally make out through the haze are the usual diatribes (en espanol) about America, las capitalistas, punk girls and ... vikings. I'm still not really sure how South America and nordic pirates go together, but sure, whatever. You're not here for their exegesis on what Hrafnkel tells us about Medieval Scandinavian morality and law; you're here to get knocked on your pooper by insane blasting. Unfortunately, the drums sound like a teletype in an old timey newsroom and the occasional musical hooks--the groove of "Viagem Clandenista" or the jangly '60s rock guitar that starts off "Ordo Ab Chao (Anapolis metal ao vivo)" rapidly get swamped by the murk and lose their punch. All acknowledge, both enemies and friends, that La Tormenta have the requisite skills to make a play for blast beat glory, but in some respects they are an unlucky band.

[Full disclosure: the band sent me a download.]
Posted by Andrew Childers at 7:29 PM