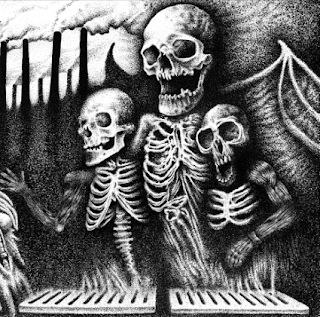 Wake
False
Handshake Inc. /7 Degrees
On albums like Leeches, Wake have proven themselves to be past masters of the grindcore gallop: smushing all of their brutalizing songs together into one spiked-bat wallop. But with False, the Canadians are letting things air out a bit more. There’s a defined space between songs and the tunes themselves seem to breathe a little easier. While that means False may not have that same bull charge rush you’re used to from grind, it shows Wake have supreme confidence in their work and their faith and your attention are rewarded by a pack of precision crafted grind tunes.
There’s attention to detail at every level of False, and Wake have delivered genuine songs as a result. The album sounds a bit like Heartwork stripped of its suffocating melodicism and rewritten with Circle of Dead Children’s brutal songwriting economy. Bolstering that impression, Wake’s cynicism is seethed in a Jeff Walker sneer, making their declamations almost discernible. That’s all to False’s benefit, but the real triumph is the way every song has a distinct personality. Musical natural disaster “Vacant” battens down under windswept guitars and pounding hail drumming before succumbing to the wildfire inferno of “Smolder.” Later in the album, “Bleak” is all hedgehog prickle as the guitars spike and keen like a defensive layer of spines. Each of the 11 songs boasts little moments like that to separate them from their kin.
Great grindcore albums thrive on being roller coasters of screaming adrenaline that drag you face first through 20 minutes of whipsaw insanity. Wake have sacrificed some of that aggression with False, but the tradeoff is a throwback to an era when grind bands had the chops to bust out songs with strong enough hooks to stand on their own. That Wake managed that feat 11 times in a row in less than 20 minutes is nothing short of remarkable.

[Full disclosure: the band sent me a download.]
Posted by Andrew Childers at 7:31 PM