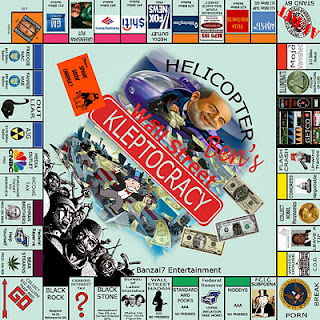 I’ve been re-reading Brian Wood and Riccardo Burchielli’s brilliant and prescient DMZ comics lately. It makes me think a lot about the conditions that could lead to a second American civil war. A war-weary public feel like they’re about to be railroaded into yet another military intervention in the Middle East without any clear understanding of the goal or strategic necessity. Whackaloons are talking about secession because they lost a democratic election. Congress is so broke that it can’t even come together to accomplish the most basic requirements of governing. There’s something in the air that Brian Wood could see coming nearly a decade ago. People left, right and center have this vague, undefined feeling that forces just out of sight and beyond their control have taken over the levers of power, a quiet coup by the kleptocracy.
Astute grinders sensed it coming as well. Texas libertarians Kill the Client dedicated a whole album to the concept way back in 2008.

Freedom-loving Ron Paul aficionado Champ Morgan launches a revolutionary diatribe, exhorting people to rise up against the plutocrats who have used their wealth and influence to tilt the economic playing field against Joe Sixpack who’s just trying to cover a mortgage and keep the kids in school. It’s the frustrated cry of the bewildered workaday office drone who never got a fair shake. Kill the Client aren’t calling for a huge societal upheaval. They just want the rules to be square for everyone.

Hailing from the opposite end of the political spectrum, Jan Frederickx and crew appropriated the language of Karl Marx when they called out the kleptocrats on Agathocles’ 2010 effort This is Not a Threat, It’s a Promise. Frederickx exhorts “Comrades of all nations [to] kick back capitalist domination.”
Two bands with almost diametrically opposed political ideologies keyed in on the same sense of frustration with the way the modern economy is unforgivably gamed to the benefit of the already rich. Same diagnosis but different prescriptions. However, it gives you the sense that maybe something is brewing among the disaffected masses of wage slaves who lack the clout to force their elected representatives to act in their constituents’ interest. So maybe next time somebody warns you about a redneck uprising in Helena, Montana, you better pay attention.
Posted by Andrew Childers at 7:34 PM

Labels: agathocles, cleptocracy, grindcore, kill the client, namesake, this is not a threat it's a promise

We arent libertarians. Thanks for the plug though
- James Delgado /ktc

sorry about that. i used to talk to morgan way back when and he wasn't shy about being more of a libertarian. clearly, i shouldn't have imputed that to the rest of the band too. thanks for correcting me.