G&P Review: Who's My Saviour 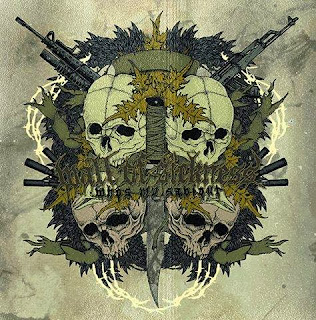 Who’s My Saviour
Wall of Sickness
7 Degrees
Discussing the difference between surprise and suspense, Alfred Hitchcock said suspense is telling the audience a bomb under the table will go off in five minutes and then watching ordinary people obliviously talk about baseball. He could just as easily put on the opening sequence from Orson Welles’ Touch of Evil. It’s an unbroken tracking shot that follows a car with a bomb hidden in its trunk as it wends its way through narrow Mexican streets filled with tourists and revelers on its way to the American border. After building up the excruciating tension, that the bomb explodes off screen may be the most jarring part of the shot.
A bomb will go off at the end of Wall of Sickness.
In fact, the first three songs are united by a rhythmic metallic clanking that sounds almost like a detonator ticking away in a car trunk. Who’s My Saviour savor that tension while flirting with restraint. The German trio’s prior album, Glasgow Smile, was a hallucinogenic thrill ride of off kilter riffing and concussive artistry, pushing grindcore’s dynamics and sneaking in sly melodies without ever sacrificing the headlong rush that makes it work. If there’s an album that truly embodies the trope of the overlooked masterpiece, Glasgow Smile was it.
But latest EP Wall of Sickness toys with you by playing things relatively straight at first, casually building up the little layers that make their songs interdimensional portals of sonic wonder and mystery.  “Intro” is all queasy seasick riffing at Quaalude speeds over a sample of Massachusetts Rep. Michael Capuano ripping into a panel of bank presidents who came hat in hand to Congress looking for a bailout. From the outset, Wall of Sickness is a fraught record that oozes the malaise of our current economic implosion. The first few songs are fast-fingered grind rushes that still drip with technical acumen in service of surgical strikes at the heart of a faltering society. These are also some of Who’s My Saviour’s most tuneful efforts; “Hemingway” and “This World Belongs to Us” practically beg for the sing along treatment. “Pillbox” slithers with a slimy sleaze before the song is devoured by a colony of army ants on the warpath.
But there’s a bomb at the end of this EP. The fuse gets lit somewhere around sixth song “Niere Kopf” as the wonted angularity and ambition start bleeding through Who’s My Saviour’s pores. The preceding five tracks were only intended to tenderize your mind to let their multidimensional daggers slide in all the more easily. The exuberant songwriting explosion bombs out of final track “Weedeater,” which builds a wall of stoner drone feedback into cyclopean citadels of circular riff insanity every bit as obsessive as the finest moments of “Shizo” or “When Magic Turns into Black Plague” on Glasgow Smile.
After my first listen to Wall of Sickness, I was disappointed. I thought Who’s My Saviour had sacrificed the quintessence that made them special. That changed a dozen listens later (all in the same afternoon, on endless repeat, I must add). Turns out I was too busy listening to the baseball discussion and not paying nearly enough attention to that bomb under the table.

[Full disclosure: 7 Degrees sent me a download.]
Posted by Andrew Childers at 10:17 AM

Your review prompted me to give it another listen, but still am not particularly sold its all a bit too wavy if you catch my drift. They could definitely done without the intro too. I will reach that dozen time benchmark like yourself before casting final judgement.