The book: Tours of the Black Clock by Steve Erickson 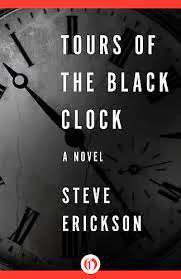 Banning Jainlight, a frighteningly large half-Indian teen on a Pennsylvania farm, murders his brothers in 1930s after being made the butt of an exceptionally cruel joke. On the run in Europe at the outbreak of World War II, Jainlight eventually becomes Adolf Hitler’s personal pornographer, crafting supremely perverse tales of sex and sadism for the 20th Century’s most evil personality in an alternate reality where the war never ends, dragging on in a futile stalemate for decades. Eventually even history's greatest villain becomes an afterthought, a doddering old man in a secret hole, half forgotten and the half that is remembered more myth than man. As Hitler slips into his dotage, he clings to Jainlight’s stories and the haunting heroine, the victim of his lust, becomes the dictator's great love. The tales become so compelling they bleed into reality as Jainlight plots to break the soul of history’s greatest monster in an act of vengeance that can only be forestalled by a confused young mother’s love. Erickson’s novel is bleak, nihilistic and violent as Jainlight’s degenerate scribblings collide with a hallucinogenic reality and the only possibility for redemption he may ever unknowingly achieve.

A representative passage:
Big is the violence in me.
It has a sound, the slosh of Henry’s brains when I take his head in my hands. I suppose in the last moment before his ears run with the pulp of membrane and blood he understands that I know. The scream from him, well, it’s not much of a scream, really. A bit of a yelp. It cuts off mid-pain. If I were a bit more selfpossessed in this moment I’d prolong it a bit, to make sure he knows that I know. To make sure there’s not a misunderstanding. I drop him from my hands and he crumples to the floor. Oral looks at the heap of Henry there in the moonlight and the expression in his eyes is very satisfying to me. He looks from Henry to me, his eyes wide as dollars, and he bolts for the door. I catch him long before he gets there. He’s screaming so as to be heard clear across the valley, but the sound of it just can’t travel fast enough to make any difference.

The album: Frozen Corpse Stuffed With Dope by Agoraphobic Nosebleed 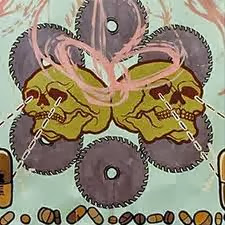 Erickson’s writing is twisted and perverse without being trite or stereotypically horrific. It sounds like something that could have come out of Agoraphobic Nosebleed’s early output, particularly when Carl Schultz was adding his cerebrally twisted vision to the caustic mix. There was nothing like early ANb, who managed to shock and confound without giving in to cheap gore. There was always an undercurrent of social criticism that lent a pointed edge to the band’s misanthropy, which too many of their contemporaries missed. Like Erickson, Agoraphobic Nosebleed know that the real horrors hit close to home.

This is as far as I come ever
Most everything’s nonsense now
Confusion has replaced amusement
More worthless wonders of the world to confuse our libido
I need to sleep not feel
I’m not there, not here
An unwashed cock at a point in time and space where pussy is your asshole and the hurt is acute
Posted by Andrew Childers at 8:03 PM