The book: The Wind-Up Bird Chronicle by Haruki Murakami 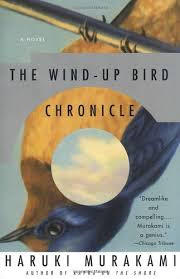 The Wind-Up Bird Chronicle might be the Murakmi-est of Marukami’s novels. It ticks off a list of several recurring motifs in his writing, including vanishing women, passive men, symbolic cats and sudden shifts into the realm of bizarre magic realism. There’s a bone-deep melancholy to the allegorical tale of an unwittingly unraveling marriage. But Murakami makes a fascinating choice to pair the intimate tale of two people falling out of love with a digression into the history of Japan’s atrocities in Manchuria during World War II, something the Japanese tend to gloss over. Early on, the protagonist meets an elderly veteran of Japan’s China campaign who recounts the horrors he’s witnessed committed by every nation involved, the horror of which still haunts him and erodes his confidence in his country and culture. Murakami pairs a couple whose breakdown in communication ruptures their marriage, thematically playing that off of Japan’s unwillingness to face to its own history of atrocities.

A representative passage:
Before long, the entire skin of Yamamoto’s right arm had come off in a single thin sheet. The skinner handed it to the man beside him, who held it open in his fingertips, circulating among the others to give them a good look. All the while, blood kept dripping from the skin. Then the officer turned to Yamamoto’s left arm, repeating the procedure. After that he skinned both legs, cut off the penis and testicles, and removed the ears. Then he skinned the head and the face and everything else. Yamamoto lost consciousness, regained it, and lost it again. The screams would stop whenever he passed out and continue when he came to again. But his voice gradually weakened and finally gave out altogether. All this time, the Russian officer drew meaningless patterns on the ground with the heel of his boot. The Mongolian soldiers watched the procedure in silence. Their faces remained expressionless, showing neither disgust nor excitement nor shock. They watched Yamamoto’s skin being removed a piece at a time with the same kind of faces we might have if we were out for a stroll and stopped to have a look at a construction site.

The album: Forward into Regression by Maruta 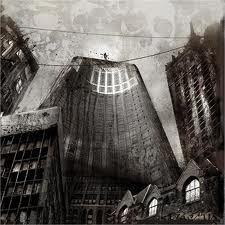 Florida’s recently reanimated Maruta take their name for the Japanese word for "log of wood," which was the derogatory term members of the infamous Unit 731 would use for the Chinese prisoners that they experimented on in ways that would appall Joseph Mengele. So that’s the obviously overlap. More importantly, I think, the concept suggested by the title Forward into Regression really captures something about the mindset of someone who is willing to commit the most horrific of atrocities all in the name of advancing their nation. There’s a point where violence becomes to repetitive that it becomes happenstance and that opens the doors to brutality like that committed by Unit 731, whose members never stood trial for their war crimes. The mental compartmentalization necessary to brutalize your fellow human beings while simultaneously sublimating your will to a leader you consider divine really shows the breadth of human insanity.

Slave driver. Stand forth lead blind-fully, these chains of hope shall drag us with you. Drag us deep, into the ground, into the grave, into blissful obliteration. March without questions. Advance with no objection. Bound to your cables. Embodied entities in chain sequence. Move towards the ash, towards the crimson horizon. Mindless. Obedient. Devoted to follow. We march forward. Onward into regression.
Posted by Andrew Childers at 6:43 PM 3 comments: 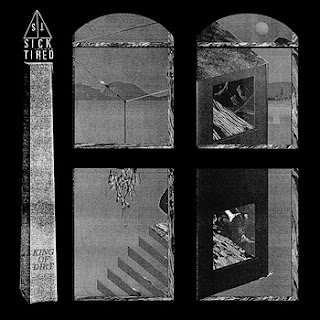 [Full disclosure: the band sent me a download.]
Posted by Andrew Childers at 6:40 PM 6 comments:

A Bastard Noise: Power Violence Lives on in a New Generation


“No Comment! Manpig! Capitalist Casualties! Man is the Bastard! West Coast Power Violence! Let’s fucking go! Kick ass!”
And with that, the term power violence entered the hardcore lexicon. The loose confederation of California bands had little in common stylistically beyond a penchant for brevity. They certainly didn’t set out to spark a musical revolution. But 20 years after Man is the Bastard shouted the term into existence, a host of up and coming bands are taking what was once an inside joke to brand outcasts in the California hardcore scene and turning it into an ongoing and constantly evolving musical movement of its own.
Though the term power violence has been “commodified and bastardized” in the two decades since its introduction, Robby Komen of Sea of Shit still sees the spirit of that first run of bands in the wave of contemporary practitioners.
“It was definitely a time/era specific thing in its original incarnation (just like anything, it has to start somewhere), but I do believe there are contemporaries that earnestly share the same ethos and ideologies that unified these bands in the past,” Komen said.
Attracted by power violence’s aggression and malleability, a modern wave of neoviolence bands are taking short shocks of hardcore festooned with prominent bass and exploring all of the possible permutations, keeping it from going stale and extinct. Sprawling across the globe and adapting to fit new musical ecosystems, power violence is more vibrant and fertile than Man is the Bastard and their cohorts ever could have imagined.

A man cannot live on blastbeats alone, though merciful Kali knows I’ve damn well tried. But even I need the occasional break, and when I do I usually swing to the opposite extreme and dive into my sludge library. If grindcore is death metal’s punkier young cousin, the same can be said of sludge, which thumbs its nose at its more refined kin doom metal. I’ve pointed out the easy commerce between the two poles before, but it’s time to give the low and slow its due.
Both grind and sludge place a premium on extremity without belaboring the songwriting with a ton of wanking. Instead, the goal is to flatten you with brute force, an object lesson in victory through superior firepower. More than that, grind and sludge also share a jaundiced sensibility. Both trade in cynical broadsides against all that’s venal and corrupt, cataloging a litany of misery, mayhem and misanthropy.
If you haven’t taken the sludge plunge yet, here are a handful of bands and their up tempo counterparts that will get you stumbling your way through the fractured pavement of modern sludge’s moral and physical decay. 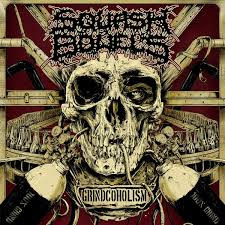 
Hello, my name is Andrew and I’m a grindcoholic.
It’s been about 15 minutes since my last Squash Bowels marathon. It’s hard, you know? I try to take it one day at a time, but that dive bombing guitar that slashes through “Tastelessness” is just such an awesome album opener. Just thinking about it gives me the jitters and shakes. I thought maybe I could manage my grindcoholism. Take a small taste here and there and move on. But it’s not like that. By the time “Trap” hits, the grisly Jeff Walker bass is rumbling through my brain and I know I’ve lost control again. I’ll be spinning Squash Bowels on endless repeat for most of the afternoon, bobbing along to head-nodder “Surrender,” an excellent early album respite. I won’t be able to control it. The live-in-the-room reverberation of the cymbals and the stuttering blasts just get inside me and I lose all sense of time and place.
I thought I’d hit rock bottom the day some random woman on the Metro was staring at me as I was clutching invisible citrus and making screaming faces during the morning commute. But recovery has been a lot harder than I thought it would be. I’ve come to understand my grindcoholism is not something I can cure. It can only be managed. I’m in a program and I’m working the steps. I hope to one day be able to manage my disease. I’m trying to stay strong and just take it each day as it comes. When I think I can’t manage any more, I call my sponsor for help. But the last time I tried all I could hear over the phone was the stomping tread of “Steering.” Somebody else may have fallen off the wagon.

Read more »
Posted by Andrew Childers at 8:08 AM 4 comments: