Bodies in the Gears of the Apparatus: How Assück’s Anticapital Defines Grindcore Imagery 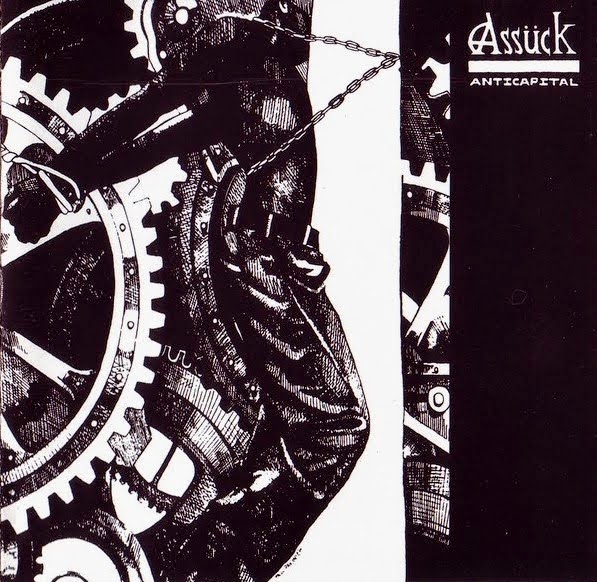 I submit to you that Assück’s Anticapital is the greatest album cover in grindcore. There may be images that are more iconic, more striking and more artistic. But Anticapital manages to perfectly embody and define everything that grindcore’s first and second waves stood for.
Anticapital boasts a deceptively simple image for a no-frills band that believed in the power of grindcore’s to the point aggression.
First, the 1991 album’s black and white aesthetic is a throwback and nod to the crust punk that birthed and defined the earliest grindcore practitioners. It harkens back to Crass, Discharge and a whole wave of Scandinavian imitators who wore sketchy lo-fi, DIY visuals as a badge of honor. It’s also a refinement of Napalm Death and Siege’s aesthetic, adding a compositional balance and refinement to grindcore’s earliest visual cut and paste, home sketched lexicon.
The image is also conceptually weighty; it’s got the artistic and intellectual chops to stand next to Assück’s lyrical bile. The man lashed to a gear, slave to the industrial processes that dominated the 20th Century and its rush to prosperity, is also a metaphor for how the common man feels in the face of those faceless, implacable, unrelenting forces. Industrialization lifted much of the world’s population up from nothing and gave them a prosperity they could never previously attain. However, it also threatened that existence as processes became more refined and automated. Humanity saw itself become obsolete as more jobs were taken out of its hands and transferred to machinery.
Whether intentional or not, the image also calls to mind Charlie Chaplin’s Modern Times as workers try to keep up with the insatiable demands of the industrial line. Eventually, their very bodies are sucked into the machinery, human grease for the wheels of progress.

That unease would only grow throughout the late 20th and early 21st Centuries as modernization and globalization meant that not only machines but cheap labor a globe away could snatch back that very same prosperity they proffered. It’s the uneasy relationship between man and the means of production that give him the life he craves that makes the visual work. Like good political dissidents, Assück's art turns Marxist agitprop on its head, questioning the value of the very same industry that promised the workers a new life of ease.
Revolutionary firebrands that they were, Assück’s imagery also evokes ’60s political activist Mario Savio’s famous “gears of the machine” speech where he exhorted student protestors to stand in the way of the forces that were arrayed against them. Students’ very bodies needed be the protest that called faceless power to account for its actions.

All of those associations feed into the rage that fueled Assück. It’s an image that not only perfectly encapsulates what made Anticapital amazing; it also strikes a visual tone that embodies the spirit that motivated grindcore’s progenitors. It’s an image that perfectly assembled and balanced all of the elements that were in play at the time, creating a striking amalgam. Grindcore is full of indelible imagery, from The Inalienable Dreamless’ stunning seascape and Drop Dead’s skulls to Reek of Putrefaction’s meat collages and Sounds of the Animal Kingdom’s man-beast hybrid. Each image is the first portal into the music within. But very few images, such as the Anticapital art, so precisely define not only an album but a whole wave of musical innovators.
Posted by Andrew Childers at 9:18 PM 2 comments: