Blast(beat) from the Past: Assault 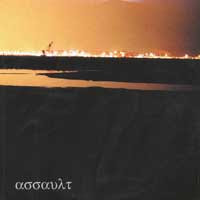 Assault
Assault
H:G Fact
2001
Are you like me? Do you obsessively read Jon Chang’s liner notes for the Discordance Axis albums and become enraptured in his thoughts on font? The guy wrote a song called “Typeface,” f’chrissake. It’s good to know I’m not the only one who’s ever geeked out on font design and what it says about us and how they can manipulate our mindset. (C’mon raise your hands if you’ve watched Helvetica or if it’s still bouncing around your Netflix queue somewhere). Such is the power of the visual art, eh, Sunyata?
The point of all that being, I bought Assault’s self titled album a few years back completely unheard for two simple reasons: it’s Japanese and the interesting typesetting looked like something Chang would cook up (it’s not) considering his visionary design work for bands like 324 and Asterisk*.
I may have been wrong on the art, I was right to trust my instincts when it comes to the Japanese. Assault revel in the strain of no bullshit hardcore that will never go out of style as long as there’s a pissed off teen in a basement somewhere. No experimentation, no chug-a-lug breakdowns, just furious punk storming straight ahead. The songs have some metallic heft to them and just a sheen of melody in spots (“Method’s” moody opening) but they’re assaulted with reckless, energetic abandon that prizes punch over precision. Bullet-belted and leather pantsed guitarist Osamu looks like he stepped out of a bad Possessed or Destruction cover band circa 1991 while Kaoru slaps away at bass strings that sound like slackened phone lines and drummer Kentarou recklessly bangs at his kit. Frontman Satoru has such a charming Engrish delivery as he barges through a song like “Victims for Jackyls” (or “Veectimsssssaahhhhhh for Jackuuuulssaaahhhhhh”) that you can’t help but bang along.
Assault hit it and quit it in an easily digestible 20 minutes that makes multiple rotations of head down bangers like “Go for Lust” and the Motorhead-inflected “Object of the Attack” mandatory.
I know nothing about either the band or the album beyond that. It’s Japanese; it’s hardcore; it makes me smile.
Posted by Andrew Childers at 6:33 PM

Labels: assualt, blastbeat from the past, h:g fact, hardcore, japan

it is not just you.

it's times like this i wish i understood japanese. but given that the french, german, russian and spanish i studied never stuck, i guess i'm just s.o.l.