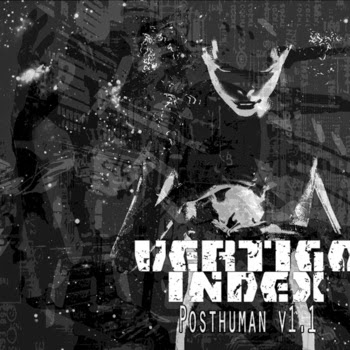 Vertigo Index
Posthuman v1.1
Bandcamp
They’re named Vertigo Index. Do I really need to explain where these information snipers are coming from? On the off chance it’s not obvious, this carcass lottery from the remains of Bastards and Scum Guilt come apart together come together alone to worship at the altar of Jouhou. But in a refreshing twist, their damage style hews close to the Discordance Axis template without slavishly recapitulating the past.

Rather than going for another reincarnation, Vertigo Index shine brightest when they dial back the mimetic elements and take the Discordance Axis influence in new directions. Their best riffs indeed bathe in Rob Marton’s love of odd tones and musical tension, but through attrition Vertigo Index deliberately slow them down, putting one of this century’s fastest bands on a ruin trajectory with ominous sludge slog. EP standout “No Fate But What We Make” slows down a Marton-style riff to allow you to savor the odd interplay of the notes and the way they warp and bend through repetition and sustain. It’s a great, smart use of an influence without straight up mimicry. That’s not to say they can’t blast when needed. “Mother Boxx” tries to shove a Witte-grade blast beat through a 57 second aperture of pinholes, squeezing a career of acceleration into a super dense minute and it works splendidly.
In the increasingly crowded realm of Discordance Axis tribute acts, Vertigo Index are probably better than The Parallax View, about on par with Syntax but not quite as good as Asterisk*. Still, it’s a solid 3 out of 5 on the Kim Novak scale for a promising first effort.
Posted by Andrew Childers at 8:25 PM No comments: 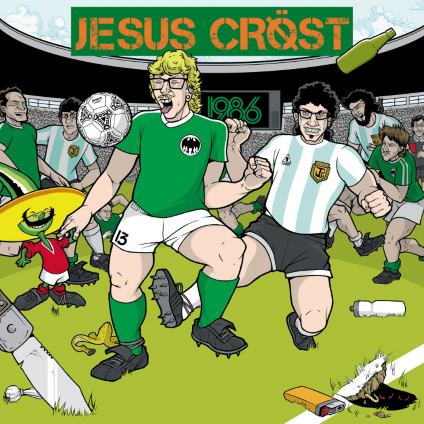 Jesus Cröst
1986
Bones Brigade
The worst aspect of the quadrennial World Cup feets-ball tournament is suffering through that one coworker who has suddenly declared him- or herself grand poobah of all soccer, loudly pontificating on the arcane advancement rules gleaned from Wikipedia. I’ll never understand how the United States was able to lose its way into each round. (And quite honestly I don’t care because, duh, it’s soccer and I’m an American [USA! USA! USA! USA!]). But for those of you with fond memories of Paul the Octopus and a quarter hour to kill, Rotterdam soccer hooligans Jesus Cröst penned an ode to the 1986 World Cup on their third album.
Musically, the dynamic Dutch duo has not advanced the powerviolent arts significantly with 1986. In fact, there’s a monochromatic quality to writing on the 22 songs that blurs them into a somewhat long and confusing whole (Hey, just like a soccer match! Perhaps it’s a meta commentary on the experience of watching the game?).
Taking a cue from Macabre, each song is dedicated to a different footballer of yore, shining 50 second spotlights on players that give the album a strong narrative quality even if the music is frustratingly lacking in diversity. It’s a great idea, but one similar song careens into another. It’s like watching a game from way up in the nosebleeds where you can’t see jersey numbers, so the action all becomes a formless smudge of people milling about way down on the field. Jesus Cröst’s past two albums were hacked from the same blast, pause, scream, blast foundation but they felt more invigorated and propulsive than 1986. So it kind of sucks that this is their farewell effort knowing that they have so much more to give.
America’s periodic, herpes-like flare up of soccer fever has passed, but if you’re a football fan with a passion for powerviolence then Jesus Cröst have the (oddly specific) cultural crossover you’ve been waiting for. 1986 is not a bad album, but you’ve heard this done better, even by this band.