How Swede it is (The Punk Years): Anti Cimex Part 3 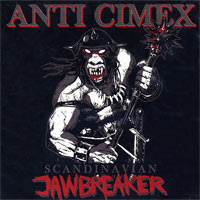 Anti Cimex
Scandinavian Jawbreaker
Regain
Anti Cimex would like to remind you the recent rash of hardcore bands getting sleazy with a little Motorhead is no new phenomenon. Like late ’80s TSOL, these Swede punks were surreptitiously sliding some cock in with their rock on 1993 album Scandinavian Jawbreaker when the rest of us were girding up with flannel for half a decade of mopery.
“Braincell Battle” or “Only in Dreams” could easily be reckoned as Anti Cimex’s “Ace of Spades” as the band drifted even further from their humble d-beat roots to a verdant pasture of grime and debauchery.
No matter how debauched, though, Anti Cimex never wander too far from their punk roots. So classic Discharge is augmented with nihilistic ZZ Top boogie on “New Blood,” “Nailbiter’s” toasted gruyere horror film keyboards, or even by the surprising delicacy of “Pain (U Bring Me)’s” interlaced acoustic and electric guitars. Central to the album and its bipolar moods is the two part title track. “Scandinavian Jawbreaker Part 1” is a soccer hooligan of a punk tune that’s all pounding drums and scathing guitars while its sleazier twin, “Scandinavian Jawbreaker Part 2” is a biker bro hymn with a catchy “No chicks/Big dicks” refrain.
Anti Cimex’s DNA lurks in the genetic code of just about every punk band to call Sweden home and former band members can be found anchoring current stalwarts like Driller Killer and Wolfbrigade but the band’s influence can be felt even wider (as At the Gates' Alf Svensson, who contributed both album art and riffs to the punktastic “…Of Ice” can attest). Though I don’t think Scandinavian Jawbreaker is as strong or as thoroughly realized as predecessor Absolut Country of Sweden, it’s a vital transition for the worldwide punk scene, paving a greasy biker sound that is only currently being emulated by hardcore kids across the globe.
Posted by Andrew Childers at 7:09 PM

Amebix also adopted a biker bent as their career progressed. I did not hear any of this in their early work - then again I might not have listened as close as I thought...

206 raises an important point. i had meant to mention the "amebix creep" in anti cimex's songwriting, but that thought got lost in the editing process. thanks for bringing that back up.

I have a question.What is it a movie or a cd music?,I have never heard about it, but I think that it is so spectacular and very cool, I think that It is an important point.