Their Bodies, The Performance Machine: Cloud Rat Unleash an Ode to Daunting Daughters

I sat upon the shore
Fishing, with the arid plain behind me
Shall I at least set my lands in order?
London Bridge is falling down falling down falling down
Poi s'ocose nel foco che gli affina
Quando fiam uti chelidon--O swallow swallow
Le Prince d'Aquitaine a la tour abolie
These fragments I have shored against my ruins
Whey then Ile fit you. Heironymo's mad engine.
Datta. Dayadhvam. Damyata.
Shantih shantih shantih 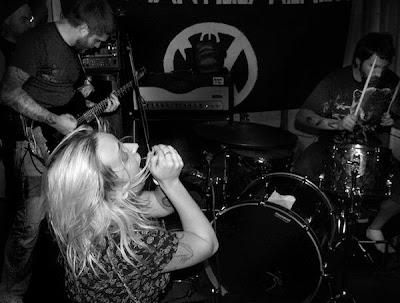 According to a variety of Eastern religions, our karma chains us to a nearly endless cycle of rebirth and suffering. But occasionally the blessed few achieve enlightenment, transcend their limitations and break that cycle through a process of liberation called moksha.
Cloud Rat's Moksha is built on a lifetime of bad luck, poor timing and worse decisions. The Michigan trio's latest, breakout record is a baker's dozen songs about addiction, loss and hard times, but it's so much more than a simple recital of misery. No matter how gray the skies get in Cloud Rat's world, there's an uplifting glimmer of hope that creeps through when you're not prepared.
The result is the clear frontrunner for album of the year and it's only January.
"Madison initially had the idea of using Moksha as an album title, and we just kind of ran with it because it can represent so many things that our lyrics address," guitarist Rorik said. "Liberation in a literal sense, i.e. animal liberation, Earth liberation, humyn liberation, feminism, sexual/gender liberation, etc. This existence that we all inhabit is so full of suffering and despair, and has always been that way, whether by nature’s hand or man. We all were brought in to this world against our will, and death is absolutely the only way out. There is a song in particular on this record that touches on that whole idea, 'Infinity Chasm.' I have a nine year old daughter, and the lyrics to the song are written like a note to her. First reminiscing about all of our time spent together, then apologizing for subjecting her to this world with all of its suffering as well as joy and beauty, and then showing the reality that eventually I will be gone and she will be gone, and there is nothing we can do about it." 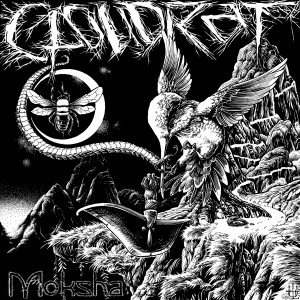 For a band that went from daydreaming about starting a band to recording their first album in a scant six weeks, Moksha, released by IFB Records and Halo Of Flies Records in the United States and by React With Protest Records and 7 Degree Records in Europe, is a breakout moment that finds Cloud Rat expanding their sonic palette beyond simple hardcore without ever sacrificing the aggression that nurtured them. Instead, they build on their natural strengths with an extra layer of stumble-toed gloom. The mumbled misery of "Infinity Chasm" and a devastating take on Neil Young's junkie lament "The Needle and the Damage Done" may anchor Cloud Rat to their karmic penance, but salvation is in within the trio's sight.
Moksha is centered around vocalist Madison's emotional purgative, and she spits and screams her way through a lifetime's frustrations. No woman has so utterly dominated a grind album like this since Alyssa Murray stole the mic with Disrupt. Madison wails and eviscerates your heart like a hardcore Billie Holiday. Rorik and drummer Adrian smartly give her the foundation she needs to lay on the line one of the most bare and provocative vocal performances you'll ever hear. Where too many grind bands hide behind layers of metaphor or safe political abstraction, Cloud Rat is deeply personal and emotionally jagged.
"I always feel really self-conscious about my vocals in the studio," Madison said. "I didn’t really prepare much, just brought my lyrics and screamed them at Rorik because he stresses me out in the studio. Kevin Kitchel makes things really comfortable for us though, so that helps. A lot of my lyrics are very personal, so that brings out some demons as well."
Madison's lyrics are so personal she's occasionally shied away from setting them to tape, but her bandmates urged her to share her experiences.
"There have been numerous times when recording over the past three years that she has been reluctant to put some of this stuff out there, this record included," Rorik said. "She usually does though, and I commend her for it. We all come from broken homes, abusive upbringings, past drug problems, etc. There are a lot of other people out there who have dealt with the same things and worse, so that’s why I think it’s good that she puts that out there, so others can relate."
Kitchel (of The Oily Menace fame) has recorded all of Cloud Rat's music, and he said the band has become increasingly comfortable in his home studio. That allows the band to dig deep and focus on their performances, he said.
"My studio isn't a studio; it's just my dining room and a live-room the size of a mini-van down in the basement. So when people come to record, it's also hanging out with my cats, making food with stuff from the garden, and probably a lot of drinking because I have a kegerator that is usually full of homebrew or local stuff," Kitchel said. "We were fast and firm friends! In the years since the first recording session we have got to be much closer, and Madison even lived here for a while. She even pushed the bass player for The Oily Menace (who also lived here) through a window while dancing, so like I said, firm friends!  It's that level of comfort that lets bands be real. There were tour deadlines for each and every recording, but this time the guitars and drums were done months before the vocals. It's pretty amazing to me that they had so many great songs written for all these releases. The Moksha vocal and mixing sessions were I think over one weekend just before they left for the tour with thedowngoing, right down to the wire."

...and the Damage Done 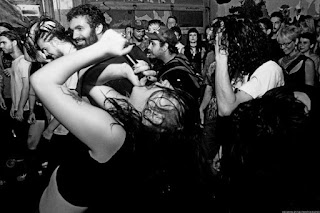 Ecologically minded and unabashedly feminist, Cloud Rat also continue to stripmine the matriarchs of antiquity for metaphors to encapsulate their songs' themes, combining the band's penchant for feminism, paganism, and Eastern spirituality into a single package.
"Moksha does again borrow a bit from paganism/mythology, significantly in the tracks 'Olympia,' 'Vigil,' and 'Daunting Daughters,'" Rorik said. "We are all somewhat spiritually inclined. I think that mythology, especially Eurasian mythology/spirituality, is fascinating, and using it for imagery and lyrical allegories and metaphors makes things a lot more interesting than just lyrics like 'The world is fucked, government sucks, burn it down,' etc. I mean, I am way into a lot of bands that do that kind of thing, but we just choose not to."
While Cloud Rat have not abandoned the grind that has built their buzz the last few years, Moksha is largely defined by their extra-genre excursions, centered around their take on Neil Youngr. Drummer Adrian was the impetus behind the band's first recorded cover.
"It was Adrian’s idea to cover Neil Young. We always talk about doing covers but never do it. He was set on it, so one day I sat down with it and started figuring out how we could go about it," Rorik said. "I decided that we should basically just do it the way Neil did it, only full band/distorted, a bit slower and gloomier, with all three of us singing. As I mentioned earlier, drugs have been a big part of our lives since we were young. I’ve done a lot of crazy shit and started when I was 11 years old. The three of us have similar stories. Heroin ripped our community apart once, where about half of the punks in Mount Pleasant were into it. We lost some friends, some dead, others in prison, lives destroyed, etc. That’s why we did this song, because we know what it’s like, and Neil said it best: 'I’ve seen the needle and the damage done / a little part of it in everyone / but every junkie’s like a setting sun.'"
Adrian also provided the plaintive piano outro that delivers the album's final emotional uplift. More than a throwaway track at the end of a record, Moksha's title track punctuates the psychological journey. It's a spiritual culmination of Moksha's overriding themes.
"Originally 'Infinity Chasm' was going to be called 'Moksha,' but then Adrian brought this to the table a few days before we were going to finish vocals and mixing," Rorik said. "We all thought it was perfect for the record, so we kept it. He has a project with our friend Tom called Found Letters that is ambient/noise stuff, and they did this track one night fall 2012 while really drunk and depressed, at a barn in the middle of nowhere."
It's that kind of inspiration and confidence that make Moksha the must hear album of the year. It's a record guaranteed to place Clout Rat near the top of many best of 2013 lists.
Shantih shantih shantih.
Posted by Andrew Childers at 7:46 PM

Great read Andrew. I had a real tough time trying to put my feelings into words about this one and settled on drooling like an idiot about it.

Despite my utter disregard for spirituality I really like what they bring to grindcore and I think you've expanded on it very well.

Nice use of the wasteland, such a great work for metal and music.

Ooof, this record. Seriously so good. Just got my copy in from Halo of Flies today, so awesome. I need to finish up my review of this like, tomorrow, since I'm already behind everyone in the world on reviewing this one. Awesome review, by the way.