The book: The Illuminatus! Trilogy 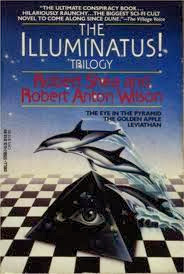 Robert Shea and Robert Anton Wilson put the voodoo into economics with their occult libertarian opus The Illuminatus! Trilogy, which blends together just enough fractured history, complete bullshit, libertarian broadsides and kinky sex to be confuzzle and amaze the most burned out acid casualty from the ’60s and anyone else with a biting sense of humor. Robert and Robert’s scifi whatsis touchstone is a mordant mix of spy shlock, 20,000 Leagues Under the Sea, John Dillinger, the Bavarian Illuminati, cheeky deux ex machina, Anton LaVey’s fake satanic hustle and Lovecraftian Nazi zombie death apocalypse at a music festival that skips through time, space and point of view in a schizophrenic mirror of the fractured 20th Century. There’s a reason why this might be one of the greatest books ever written. Fnord.


A representative passage:
There was a silence that seemed to stretch into some long hall of near-Buddhist emptiness—George recognized the glimpse at last!, into the Void all his acidhead friend had tried to describe—and then he remembered that was not the trip Hagbard was pushing him toward. But the silence lingered as a quietness of spirit, a calm in the tornado of those last few days, and George found himself ruminating with total dispassion , without hope or dread or smugness or guilt; if not totally without ego, or in full darshana, at least without the inflamed and voracious ego that usually either leaped forward or shrunk back from naked fact. He contemplated his memories and was unmoved, objective, at peace. He thought of blacks and woman and of their subtle revenges against their Masters, acts of sabotage that could not be recognized clearly as such because they took the form of acts of obedience; he thought of the Shoshone Indians and their crude joke, so similar to the jokes of oppressed peoples everywhere; he saw, suddenly, the meaning of Mardi Gras and the Feast of Fools and the Saturnalia and the Christmas Office Party and the other limited, permissible, structured occasions on which Freud’s Return of the Repressed was allowed; he remembered all the times he had gotten his own back against a professor, a high school principal, a bureaucrat, or, further back, his own parents, by waiting for the occasion when, by doing exactly what he was told, he could produce some form of minor catastrophe. He saw a world of robots, marching rigidly in the paths laid down for them from above, and each robot partly alive, partly human, waiting its chance to drop its own monkey wrench into the machinery. He saw, finally, why everything in the world seemed to work wrong and the Situation Normal was All Fucked Up. “Hagbard,” he said slowly. “I think I get it. Genesis is exactly backwards. Our troubles started from obedience, not disobedience. And humanity is not yet created.” 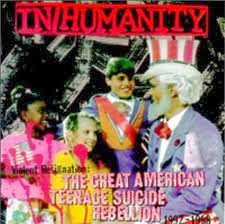 South Carolina’s In/Humanity lived to fuck with crust punk convention as they proselytized for the obviously-fake-but-still-kinda-serious concepts of “occultonomy,” “smashism” and “emo-violence.” In/Humanity’s rangy noise mixed crust punk politicking with cheesy Satanism, Charles Manson mockery and a goofball rip on the occult and esoteric to advance their goals of anarchism and personal autonomy at all costs. And with all that, their posthumous compilation demonstrates they had a deft hand at bending raw punk noise to their bidding as well. Death couldn’t even keep the band back as key members morphed into Guyana Punch Line to continue their mordant assault on mainstream mediocrity with a psychologically skewed slant on society’s ills.

People try to put us down, the short sighted never see. What’s that emo violence sound? A sound for you and me! Occultonomist grips like strychnine on your back. The beast unleashed bears[sic] its teeth, now ready to attack! EMO VIOLENCE! EMO VIOLENCE!
Posted by Andrew Childers at 6:59 PM