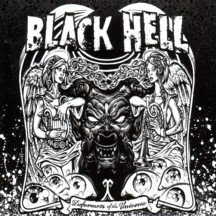 Black Hell
Deformers of the Universe
Hater of God
2006
Skew your perspective slightly and suddenly the golf and geezer friendly climes of Arizona seem less like a liverspot mecca and a tad more like a sun blasted hellscape where nothing will grow and yards have to be painted green. All of which must have been gnawing at Mike Bjella’s subconscious post-Unruh when the bassist recruited two thirds of fellow doomsters Carol Ann to form Black Hell, giving free reign to the stoner sludge anthems that had always been lurking wraithlike at the haunted edges of his songwriting on sole sludge manifesto, Deformers of the Universe.
Sheer away the obligatory intro and overlong ambient closer and you’re left with six, six, six tracks of swinging blackened doom. If you have visions of early High on Fire or Electric Wizard dancing in your heads, you’re not far off. But Andrew, I can hear you say, why do I need another Nth generation Black Sabbath clone when just about every doom band since after forever has dry humped that corpse into submission. Astute question, little grasshopper. The difference being where most members of the low and slow club seem fixated on “Sweet Leaf” and “Snowblind,” Black Hell are among the few to descant the insalubrious vibes of their forefathers, the corrosive paranoia of the Cold War, urban blight ennui and the misanthropic certainty humanity will leave nothing more than a smoking, radioactive crater as its cenotaph.
Black Hell draws more from Sabbath’s apocalyptic “Electric Funeral” and “Hand of Doom,” chronicling the end times when nuclear dukes (“Nuclear Duke,” which makes way for Iron Maiden twin guitar goodness beyond all the plodding) rain gasoline (“Rain Gasoline”) until everything burns (“Burn,” a galloping march to the end of the universe).
Black Hell proudly wear their Sabbathisms on their long sleeves and while they may not be the Masters of Reality, they have successfully deformed their particular corner of the universe.
Posted by Andrew Childers at 9:25 AM

'every doom band since after forever has dry humped that corpse into submission'
nice, i chuckle.