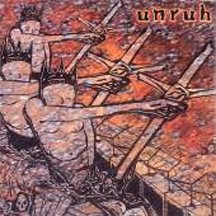 Unruh
Setting Fire to Sinking Ships
Pessimiser/Theologian
1998
A scorched earth masterpiece of punk and metal, Unruh’s farewell album is a fevered holocaust of raining brimstone that saw the quartet stretching its collective creativity to sculpt music out of living flame. Everything that made Misery Strengthened Faith such a quiet landmark was goosed up another notch on Setting Fire to Sinking Ships.
The Phoenix quartet were clearly serious about growing as drummer Bill Fees and guitarist Ryan Butler broke out piano and viola to grace their hardcore meets grind at a Noothgrush swapmeet aesthetic on opener “Spoonful of Tar,” which undergirds Terrorizer grind with rolling hardcore circle pit drums and Mike Edwards’ gargling with Drano punk wail. The tribal drumming and ringing note opener of “Finite” could have been lifted any transitional Neurosis album before the song is immolated Bolt Thrower tempo death metal. Adding to the stability and low and butchery was bassist Mike Bjella, Butler’s songwriting partner in Wellington, who stepped into the vacant four string slot before recording on Setting Fire started.
Though only recorded a year after Misery, Butler’s guitar playing had matured, giving Unruh a more expansive and confident edge. Butler was able to build off the meandering introductory riffs of both “Finite” and “Faded Tattoos,” fully incorporating their themes into the whole song despite Unruh’s penchant for sudden downshifts and spontaneous blasting.
What may have been Unruh’s most compelling trait was its anchor in everyday life. Where other metal bands were content with escapist fantasies of Satan, dragons or violent revolution, Unruh managed to turn a journalistic eye on the traumas, triumphs and tragedies going on around them without sliding into tuff guy/you stabbed me in the back hardcore cliché. The domestic dispute sample that kicks off “Complex” is disturbingly believable while “Layman’s Gallows” is the story of a laid off factory worker told in the spare, honest prose of Hemmingway.
While Unruh would only release one more song on a split with Creation is Crucifixion before internal turmoil pulled them apart, Setting Fire to Sinking Ships rightly remains a milestone of metal and hardcore.
Fittingly for a band from Phoenix, what was to rise from the ashes of Unruh would be just as spectacular.
Posted by Andrew Childers at 7:36 PM

gear-grinding, gargling, blasting... hey, what's not to love? y'know, this ain't no power violence, it's a precursor to something better. (analogy: Darkthrone's "Blaze in the Northern Sky")

[color=red]The Most Affordable XRUMER/BACKLINK SERVICE Online!
The EFFORTLESS and POWERFUL WAY TO BUILD MASSIVE # OF BACKLINKS
[color=black]
200,000 BLASTS of your URLs+ Anchor Tex, message, pictures (can be spinned) etc
$10 USD (shared with other clients like a carpool), or
$25/200k for exclusive!(you control EVERYTHING)
$50 Exclusive @ 500,000 blasts.
(Complete reports will be given to clients)

[IMG]http://img697.imageshack.us/img697/1540/arrowdownh.gif[/IMG]
For orders, questions or concerns? Email: [u]formless.void47 at gmail.com [/u]
Note:
1. For STRICT Whitehat sites, it is advised to create buffers to pass on linkjuice. i.e. social bookmarks, cloaked pages etc.
You can blast the site directly, but it entails risk.
Using buffers are 100% safe, speaking from experience.
2. Xrumer is a very technical tool. Just describe to me what sorts of effects you want and well make it happen!
If you want to buy Xrumer?
>>>>> http://cloakedlink.com/chzgykebsd <<<<<<