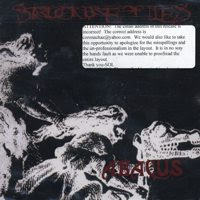 Structure of Lies
Abacus
Deep Six
2002
After setting fire to a sinking Unruh, guitarist Ryan Butler and drummer Bill Fees sieved death metal chops and bulk through hardcore ethics and aggression with Structure of Lies.
The unholy spawn of a hitherto unrecounted Brokeback moment between Lennie Small and George Milton, Structure of Lies was a heavy shod behemoth that tried to balance dexterous Unruh songsmithing with crushing avalanche sonics.
Between splits with likeminded death/grinders Misery Index and Iranach, Structure of Lies gave the world Abacus, their sole solo effort, an 18 minute exploration of speed, shrieks and shred.
Album standout “Four Pinnacle Peaks” boasts neo-classical noodling atop a frosty black riff and blastbeat one-two punch that would even make the most grimm member of the korpsepaint kvlt bust a grin. “Masters of Nothing’s” hints of melody devolve into a crossover crust assault and chug-a-lug break stuff outrage as Fees leaves no section of his kit unsmashed and vocalist Cory Smith forcibly extracts his own tonsils without the aid of anesthesia.
The ligaments and connective tissue of the cyclopean beast were knit by bassist Christ Rutledge’s low slung but no less nimble fretwork, providing the sloshing, churning guts that powered the machine, freeing up Butler and second guitarist Adam Cogswell to lose the rhythm guitar and perform their Murray/Smith tradeoffs on “Burying the Undead.”
Unfortunately, like doomed Lennie, Structure of Lies was euthanized well before its time.
Posted by Andrew Childers at 9:10 AM

damn sticky keyboards! chris, NOT christ, rutledge...
And while on the "Razing Arizona" subject, particularly of Butler and Fees worship, one cannot ignore the Coronach (pre-Structure of Lies) circa 2000-2001 incarnation which was (cough) instrumental in raising awareness of grindcore in az. (see: http://web.archive.org/web/20010720072957/http://coronachaz.tripod.com/ )
Despite countless other "grind"-ish style AZ bands worthy of credit, Unruh's "Setting Fire..." has lasting value (with the help from engineer Larry Elyea and mastering Dave Shirk) within any grindcore collection.