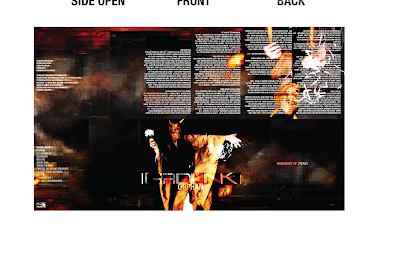 You know that segment of The Animatrix “World Record” where sprinter Dan Davis literally runs until his muscles rend and he destroys his body in pursuit of an untouchable 100 meter record, leaping from the Matrix through to reality in the process? That’s pretty much the sensation of GridLink’s Orphan, a relentless 12 minute amplification of everything that made Amber Gray the greatest album of 2008. It's a transcendent, boundary shattering nugget that’s one minute longer than Amber Gray so kwitcherbitchin, clock watchers.
Mark it down on your calendars: at 9 p.m. Eastern time Jan. 5 the race for 2011 album of the year began – and possibly ended – when Jon Chang gave me an exclusive sneak peak at Orphan.
As with Hayaino Daisuki’s transition from Headbangers Karaoke Club Dangerous Fire to Invincible Gate Mind of the Infernal Fire Hell… Or Did You Mean Hawaii Daisuki?, Orphan is also a refinement of what GridLink had already been doing so damn well. It’s an intricately layered album that boasts a bigger sound, faster tempos and more melody in one emotionally wearying package. Some of these songs are almost hummable.
“I don’t want to say I really want to make a catchy record, but I really do,” said Chang, who said Deathspell Omega is the first band to really capture his attention since collaborator Takafumi Matsubara’s Mortalized. (And may I just say, meatspace Chang is an exuberant personality whose opinions aren’t quite as … let’s call them … impassioned [that’s a good word] as one would assume from internet interactions with him. I hope I didn't ruin some of your preconceived notions by humanizing him.)
“Takafumi said the first GridLink and Hayaino Daisuki were all brutality and he wanted to add intelligence,” Chang said.
For all the hubbub about Steve Procopio (ex-Human Remains, sometimes Discordance Axis substitute) and Ted Patterson’s (ex-Human Remains/Burnt by the Sun) addition, I listened to Orphan three times before I even remembered they had joined up. So don’t expect too many changes in that direction. Rather they just lay a foundation to for Matsubara to push what he was already doing in even more aggressive and intricate directions.
Just listening to Matsubara fillet his fingertips and drummer Bryan Fajardo crack tendons on the bullet train “Scopedog” is enough to set my joints to creaking with incipient arthritis. The songs are so unrelenting in their tempos (and the band insists everything must be recorded live with no punch-ins later) that Fajardo had to master a two footed blast to provide the requisite intensity, but the payoff is in the organic aggression that forms the album’s foundation.
“This record was a huge challenge for him,” Chang said. “This was a grueling record to make. Making any record like this is miserable.”
Vocally, Chang has broadened his repertoire to keep up with his cohorts’ demanding performances. Yes, the low end grunts are back, but so is and the same alleyway mugger come-on that graced Hayaino Daisuki’s “Shibito.” That means one of the finest lyricists in grind is screaming with enough clarity that you can occasionally hear what’s on his mind.
“The high vocals didn’t fit with everything I wanted to do. I went back and changed some of the parts out,” Chang said.
And what’s on his mind these days is more political than albums past. Inspired by his recent work on “real world military stuff” at his game developer day job, Chang said he wanted to attack issues like Islam (opener “Dar al-Harb,” “Flatworlder”[sorry for the original typo]), militarism and war (“The Last Red Shoulder”), the dislocation of technology and traveling (“Red Eye,” the title track) and other splinters of our shattered millennium.
But beyond that, interpretation is up to you, he said.
“I try to come to this with no expectations of what people will take away from it. What it meant for me isn’t going to be the same thing it meant for someone else to take away from it.”
Orphan is still slated for a late February or early March release. The first pressing will be vinyl, including a remixed version of Amber Gray that adds bass by Patterson. It will also come with a download of karaoke versions of the songs so you can stop embarrassing yourself in those Justin Bieber lip synch videos you’ve been posting to YouTube. A “very limited” run of CDs – possibly as few as 200 – will come later. And if you didn’t catch the band at Maryland Deathfest (which pretty much paid for the recording sessions for Orphan), don’t look for GridLink on your local bill. The combination of a sagging economy and the reality of being bi-continental means the band probably won’t venture beyond the confines of New York City.
But while you’re still absorbing Orphan, GridLink are already talking about the next album. Inspired by Red Dead Redemption’s soundtrack, Chang said that could involve acoustic grindcore – complete with blastbeats and death screams if Matsubara can get his head around the concept. Early experiments in that direction haven’t gelled as of it, Chang said.
Until they work that out - even if they never do - Orphan will provide plenty to dissect and explore for now, demanding repeated listens to tease out its subtle mysteries. If I didn’t already have a decade of emotions invested in The Inalienable Dreamless, this could have been my favorite album of all time. For some of you, it probably will be.
Posted by Andrew Childers at 7:56 PM

"Mark it down on your calendars: at 9 p.m. Eastern time Jan. 5 the race for 2011 album of the year began – and possibly ended – when Jon Chang gave me an exclusive sneak peak at Orphan."

Big talk! Actually, the race for album of the year began with WADGE. Grindcore Lu'au is an amazing album that keeps on giving.

i thought wadge's album came out last year? i've actually been hunting around for a physical copy for a few months until the grind to death borg-grind collective pointed me to the download.

It came out on the first, on J. Randall's failed Bovine 2.0. Now it's on his yet-to-fail Grindcore Karaoke. Physical release to come soon, with extra tracks including some underground favorites (eric wood).

I created a topic in the Decibel forum and Paul came in and told us what's up: http://www.decibelmagazine.com/forum/decibel-magazine-general-discussion/wadge/

As for acoustic grindcore, all I can do is post this track we did in 2007 for you all to hate:

well there you go. thanks will. coulda sworn i saw that advertised for sale over at relapse last year. thanks for the correction.

they played the whole thing in its entirety at MDF last year, and by the end of the set, the entire audience was slack-jawed and drooling. im psyched to see if its just as incomprehensible (in a good way) on record as it was live.

Yeah, Matsubara is a great guitarist. Mortalized kills, and if everything they do is live that takes a of of practice. Strangely, I've only ever done one album like that. It always seems like there is some kind of technical fuck up that prevents it.Anyway, this is one record I'm really looking forward to.

I'll second Will on Wadge, that album is a lot of fun, and it's pretty hilarious that the guy behind it is actually into tikis. I mean, its probably not an album I'll be listening to for years, but a surprisingly good album, given the silliness involved.

All this talk about a third GridLink album bummed me out a bit though, I want another Hayaino Daisuki album first :(

Seriously though, can't wait to hear the finished product, this is easily going to fuel workouts for the rest of 2011.

I really wanted to do a HD record also but we ran into 2 issues...

2. We've sold very few copies of either HD record. Basically we can't afford to make another one. Do'h~

Can't fucking wait to get my ears around this.

I don't even have a record player, but I'm getting this on vinyl, haha.

Sorry to hear about HD's dark future, though.

Very cool that the Shibito perv-vox are going to be included.

So excited to hear this. This is my most anticipated record of the year

I look forward to this greatly, as I do new Wormrot and new Rotten Sound. Sorry to hear about Hayaino Daisuki, although I might imagine,with it appearing on nearly every end of year list, there might be a boost in sales.
Out of curiosity why is the cd limited to 200 copies? If I buy Vinyl that means I wont be able to hear until I go back home in late June, but vinyl is a much better overall product. Perhaps time to invest in my own vinyl player, just for this!

Vinyl will come with mp4 download tracks. CD is import only from what I know - I think it's being run in Japan? Limited quantities are being made so there's not a large over run.

Cheers for that info, I can rest assured that I will be able to play it from my beloved companion my laptop.

Is the vinyl on Hydra Head? When can I preorder?
I think I'll miss a record chock full of nerdgasms in lieu of run of the mill politics. But that's the romantic geek in me.

I've never been more jealous of anyone than I am of everyone on the planet who's gotten to hear Orphan. Also, nice review, Andrew; awesome that you're the first one who gets a crack at writing about it.

Shant, hopefully soon. I recommend emailing the HH guys and spamming every post on Hydrablog until they offer preorder. I did a shirt as well....not sure if it will get made though....

Oh, and believe me there's tons of stuff drawn from geek culture as well. Andrew's take on the record is his own. He picked up on some of what I was going through and other things didn't connect. Which is pretty much how it goes with this stuff ^_^

Rest assured there's quite a lot for you to dive into in terms of "nerdgasms".

CANNOT FUCKING WAIT FOR THIS!!!

"2. We've sold very few copies of either HD record. Basically we can't afford to make another one. Do'h~ "

I hope that's only a temporary problem. Those records really leave you wanting more.

just to clarify, i don't want to give the impression that GL has suddenly gotten all napalm death/dead kennedys on us, but i was struck by just how concrete the lyrics to those particular songs were. i'm much more used to seeing chang cloak his ideas in layers of metaphor, interesting imagery and nerd culture references.

yes, the nerdgasms will occur, but that was just something new that really captivated me.

COME ON ANDREW, HAVE SOME RESPECT.

Seriously fuck you for reviewing this so goddamn early. Couldn't keep it under your hat, could you?

you are correct, sir. i humbly submit myself for the ritual flogging. and thanks for catching that. if i'm wrong about that... can you really trust my opinion at all?

cannot wait for this to drop.

I think that funny comment is Dave Witte.
Funny how I interpereted Mr. Childers interpretation. It's a grind world afterall.

@ Shanetera - I doubt Da5e has time for goofy shit like this. Too busy wasting the world :P

I would like to say thanks for the time you took in writing this post. You’ve an inspiration for me. You know more about the know about the Coomera Land visit at Coomera Land