You Grind…But Why?: Cloud Rat

With a musical progression that goes something like Foreigner->Def Leppard->Metallica->Dead Kennedys-> Napalm Death, I completely get where Cloud Rat’s Rorik is coming from when he describes his meandering musical history. Here’s how the promising Michigan up and comer got his grind on and what keeps him coming back. 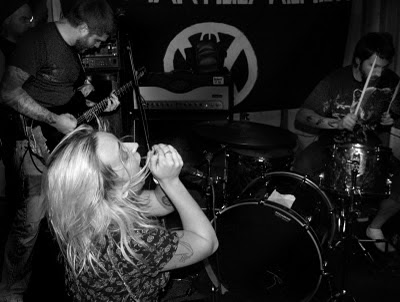 “I grew up in a really small town (Shepherd, MI), and I wasn't surrounded by a punk/metal scene until I got into my mid/later teens and traveled to other bigger cities,” Rorik said. “My mother was in bar rock bands her whole life, but by the time I was old enough to get into music she was a devout Christian. On a tip from a friend, she ordered some tapes through some Christian distro that I can't remember, and the bands were Vengeance, Mortification, Deliverance, and Tourniquet. At the time I was only about 9 or 10 and didn't really get into the more extreme Vengeance and Mortification stuff, but the other two helped to open my eyes to heavy music (it's funny that Christian music did this, because now I'm of a very different philosophy). I heard Napalm Death for the first time when I was 13, the BBC Sessions on CD. I didn't get it yet.
“It wasn't until I heard Pig Destroyer a couple years later that I started getting into it. After that it was a rapid progression into many extreme music styles, death/grind/doom/hardcore punk/etc. I've been in metal bands, hardcore bands, and rock bands, but nothing has ever got my blood to boil like playing in grindcore bands.
"I guess that I got into grind because to me, it is the fastest, heaviest, and rawest that you can get. And on top of that, to keep it interesting (for me at least), there has to be some sort of real songwriting going on, or some quirk thrown in there that keeps it fresh. And for a style of music that is defined by absolute speed and heaviness, it's amazing how much variety there is! Also, I'm a generally calm person, but I have a lot of intense thoughts and feelings that I can only get out when I play music that is as loud, fast, heavy, and cathartic as I can possibly create.
"I sometimes question my sanity when I'm in a putrid basement with 20 other weirdos, drunk and running into each other, having ear-bleeding noise pounding my ear drums. It's fun to stop and look around at those moments, wondering how you got there. I guess at this point I can't really see it better any other way."
Posted by Andrew Childers at 7:36 PM

In a way due to my recent infatuation with cloud rat, the normality of why they grind was a bummer, was hoping for something more exciting, but that would be me being selfish. On a related note, have you heard their latest release "Fever Dreams" seriously engrossing and moving grind, you can dl at GK.

I, on the other hand, am not familiar with their music at all, but his explanation of his roots here really excited me!

For some reason, my favorite part of this so far was your write up of Dig.

The features have ramped up so much since you started the Bracketology, keep up the good work! I especially love this series, I'm always impatiently awaiting the next installment.

i can't wait to announce my next big project. i think i'm close. it represents a good six months out of my life. i'm so stoked to be almost done.

oh and bill, definitely give cloud rat a listen, it's like somewhere between FETO and capitalist casualties with a pissed of chick singer. their new three way ep with the oily menace and some other band (whose name escapes me) is pretty cool too.

I picked up Fever Dreams from Grindcore Karaoke. Will check it out tonight.

That description has me excited.

Also, vocalist has a kid in the 2nd grade. Best. Mom. Ever.

I think I misread their blog. The guitarist has a kid. So, best dad, then.

I'm listening to Fever Dreams right now and it is fucking killing me!

i just found out fever dreams includes their split with the oily menace and some other tracks. so yes. yes it does. get their self titled too. it's also a free d/l but if you get their records on vinyl the packaging is made from cut up shitty alternative records from the 90s.

also, the singer wears a phobia means of existence shirt. she is my new hero.
http://cloudrat.blogspot.com/2011/09/void-haus.html

I need to check out that 3-Way Split!

The packaging for the 3-way is great, but if you want to try before you buy:

Grabbed their stuff from Grindcore Karaoke a few days ago and been listening ever since. Some of their stuff sounds like a slightly more restrained, streamlined Swarrrm, especially those sections of very un-grind-like chord progressions. So of course, I love it.