Panic! At the Discography: Discordance Axis 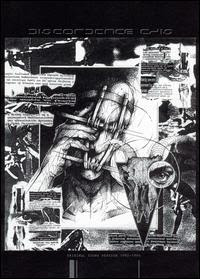 Discordance Axis
Perfect Collection: Original Sound Version 1992-1995
Hydra Head
In addition to grasping for grindcore perfection with The Inalienable Dreamless, Discordance Axis also set the bar for fan service with the early efforts compilation Perfect Collection: Original Sound Version 1992-1995. Originally compiled by Devour Records and reissued by Hydra Head the compilation collects first album Ulterior as well as many of their early splits with innovators Hellchild and Capitalist Casualties. The overstuffed 69 track effort even clocks out with the band’s earliest rehearsal recordings, which are probably only of interest to the most die hard of DxAx obsessives (I'm betting the circles would practically overlap in a Venn diagram of "Discordance Axis fans" and "Discordance Axis obsessives"). If Original Sound Version included nothing more than meditative instrumental curveball “My Neighbor Totoro” and guitar scraping screamer “Ruin Trajectory” that would be enough to cement this collection as a mandatory buy. But so much more thought went into every facet of the reissue.
Given the DVD packaging treatment that would become Discordance Axis’ hallmark with The Inalienable Dreamless, the package shines because of the care singer Jon Chang put into his exhaustive liner notes. Where too many bands are content just to dress up discography packages with some rarity photos and maybe a few old show fliers, Chang illuminates each song, offering some unique insight either into its themes, genesis or performance that illustrates the care Discordance Axis put into their craft (something he would add to the reissued Jouhou as well). His self-flagellating assessment of his earliest lyrical efforts is often hilarious and humbling. It’s impressive to watch the continual critical evaluation of the band’s work that propelled them far past their peers. With Jouhou, the discography also includes Chang’s two-part biography of the band, one of the few authoritative sources of information on Discordance Axis, a band that never got their due in their day.
If you had a gun to your head and could only choose on Discordance Axis album, of course you’re going to pick The Inalienable Dreamless. However, anyone interested in the band’s progression or the baby steps of 21st Century grindcore should also boast Original Sound Version and Jouhou in their collection as well. This is exactly what a well conceived discography should be. It serves as the perfect entry point for new fans but includes enough details and rarities that even long time acolytes will have plenty of surprises in store.
Posted by Andrew Childers at 9:15 PM

"My Neighbor Totoro" is on their split 7" with Def Master(this band sucks). It's one of the few Discordance Axis albums I listen to on heavy rotation. I can upload if you don't have?

go ahead and shoot me - i never got into the band.

isn't there an mp3 version of jouhou on the dvd?

buncha fricken heretics around here. you should all be stoned to death.

figures. i liked that def master

I really hate the production on those older DxAx releases. The guitars pack so little punch; to me at least.

I like this blog, and I've been checking it out since the beginning of 2011. Your passionate posts on here really warms my heart. I guess it was about time I forwarded that.

To me, Discordance Axis is just so much more than just a Whatevercore band. I don't want to come out as a pretentious prick, but to me, the concept DxAx just goes beyond the sonic madness that is the music. The DxAx experience really lies in those fat packages; the music, the art & other little details. The package really spices up the whole concept. 'Perfect Collection' is a good example.

I watched the original 'Evangelion' series because of TID, and I began appreciating TID even more after experiencing the series & the end movie. 'cos just like 'The end of Evangelion' contains symbolism that left so much to interpretation that ppl discuss it to this day; I think the lyrics on DxAx albums leave even more so. The Lyrics can be full of "nerdy" references, or, you can interpret the lyrics completely different if you place them in a whole different context. The light goes through the prism, and it spirals into different directions. To me, That's art.

I can go on & on, and that's my problem, so I'll stop right here. But yeah, 'Perfect Collection' is massive! Much heart put into the package! Well, to be fair; Chang puts so much heart into everything he is involved in.

thanks for that alexander. all i can say is you're a DxAx fan, just wait... i've got something coming. that's all i can say right now.