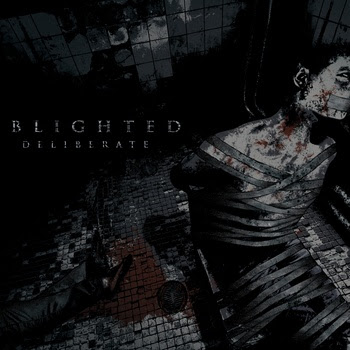 Blighted
Deliberate
Bandcamp
Blighted spare you the annoyance of having neighbors blast late night music through your bedroom wall by offering a seven song album that sounds like it was recorded in a neighboring apartment. Once you accept and get over the fact that the performances can be a bit muffled at times, you realize your annoying neighbor actually has some pretty decent taste in music.
Musically, Blighted blend the tactical nuclear strikes of Backslider with the lightning flash melodicism of Wake into a compact batch of rough and ready grindy hardcore songs that are to the point and don’t give you too much downtime to digest. Deliberate’s songs are uniformly bluff, blocky and not shy about pushing around your eardrums. However, Blighted does whip out one musical surprise in the shape of “Cycle,” which throws down slow motion heaviness glazed with an almost chiming guitar just to show they have more artistic chops even if they don’t choose to flaunt them.
So the only real knock on Deliberate is that the production forces all of the instruments and the vocals onto a single musical plane. So the album is missing some depth and interplay between its constituent parts, but that also gives Deliberate a mallet-like quality about it. Put Blighted in a decent studio with a modestly more generous recording budget and they just might surprise some people.

Posted by Andrew Childers at 6:36 PM

Oddly enough, I like something about the sonics on this. Weirdly addictive bad production. I'm going to come back to this record, I think that I like it.

Production values aside, this lot definitely have potential. And I can deffo see the Wake comparison. Will be interesting to see what they come up with next...

it's interesting because blighted have posted their older album at bandcamp too. that one has traditionally better production. however, the songs on deliberate are better.