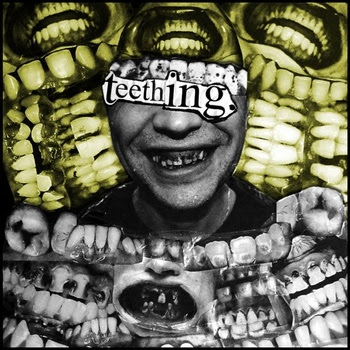 Teething
Teething
Bandcamp
High school fucking sucked. We can all agree about that, right? Being surrounded by hordes of the hormonally unbalanced, the insipid jock-o-rama culture and good teachers forced to dumb down their classes to accommodate the stupidest of students was pretty much my very definition of hell. There was not a single redeeming thing to be said of the entire miserable four year experience. So it was a bit disconcerting to hear Teething wax nostalgic about high school on the song “1996,” which has got to be the least punk thing a punk band could do. Sure they say it sucked, but the song also romanticizes things like smoking in school bathrooms and getting good and underaged wasted. I remember 1996; I was in high school in 1996; 1996 can kiss my ass.
Not to pick on that one ill-conceived song, but I think “1996” underscores the broader problem I had with the Spanish punks’ rough-throated hardcore. For all the spit and pissing, I just don’t get the feeling Teething really mean any of their generic punk sloganeering. Some of the songs sound almost like a middle aged scriptwriter’s fantasy of what teen punk rebellion feels like for some lame-ass weepy teen flick. Case in point, sour-note starting point “Hell Song” is all “I’m a worthless piece of shit” and chants of “666,” which to Teething’s ears are probably meant to sound bad ass. I just don’t get the feeling they really mean any of it. It’s more punk pose than something heartfelt. It borders on parody. Teen self-loathing is certainly a punk-worthy topic that would be instantly relatable, but “Fuck This Face,” which leaps out with blastbeats and then fizzles to mediocrity, doesn’t convey any real human connection as the singer talks about how much he hates his features and his parents.
My problem is Teething seem to be mouthing the words without delivering the emotional substance. They very well could be deadly serious about this stuff, but their approach just doesn’t convey sincerity. I get the feeling Teething very much want to their songs to be meaningful, but that’s the area where their music needs the most work.

Posted by Andrew Childers at 7:26 PM

I miss grindecision, I know it's late, but gimmie something Andrew.

ha. that was a failed experiment that deserved to die. but just for you, a grindecision quickie:

this time out obama would be napalm death. when he started there was all kinds of excitement. things were going to be different. there was passion. but wobbles quickly entered into the picture. maybe it was some of the new people in the circle not being on the same page, maybe it's just the reality of the support he was working with. so he very quickly changed from those early expectations. things became more pragmatic, maybe a little too much like what everyone before him was doing. but just at that point where you're ready to write him off for good, he pulls out something exciting that, while not replicating his history, reminds you why he interested you in the first place.

romney would be carcass. he also had something going for him way back when. he was a little unusual. but, like napalm death before him, changes started happening. they brought him a wider audience who thought what he was doing was great, but he maybe alienated those who were there at the start, but they tried to stick along. but it quickly became apparent, that even more than obama, romney was trying to be all things to all people and his output collapsed into disappointing, pointless nonsense.

There were a few redeeming things about high school for me: winning football games and wrestling matches.

That was it. Just those two things.

Even being a jock didn't result in awesome parties and tons of poon for me. Ah, to be awkward...

Luckily there was college.

wait. that's what was supposed to happen in college? clearly i was lied to.

I hope that Romney writes his Swansong soon.