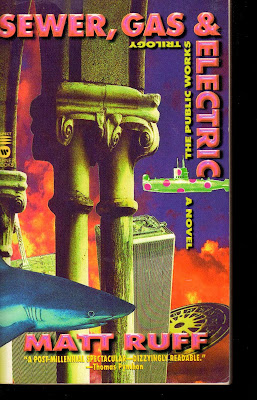 Matt Ruff’s Public Works Trilogy is many things. It’s a screwball near-future sci-fi freakout about looney pacifist eco-warriors trying to preserve endangered species against the onslaught of unchecked industrialization. It’s the tale of a racist computer’s final solution. It’s the story of a vicious mutant land shark on the rampage through the sewers, streets and Cub Scout hiking trails of an unsuspecting city. It’s also the life story of a nigh-immortal Civil War veteran who just refuses to die. But most of all Sewer, Gas & Electric is a pretty brutal takedown of Ayn Rand, who appears as a holographic head in a hurricane lamp. With Objectivism currently enjoying an undeserved renaissance among political leaders who should probably know better, it’s as good a time as any for Rand’s flawed thinking, sloppy suppositions and blatant hypocrisy to get a well deserved literary smack down as thinly veiled avatars of Rand’s own creations skewer her philosophy by injecting sloppy, random humanity into her clear cut worldview.  Mercifully, there are no 60 page speeches to slog through.

A representative passage:
“Jesus,” Joan said, as John Galt gave the novel’s closing benediction and traced a dollar sign in the space above the desolate earth. She laughed, and shut the book, and spent a moment studying the portrait on the back cover. “Who is this woman?”
“Well?” said Archie. “How was it?”
[…]
“Pinch me if I missed a punchline somewhere,” Joan said, “but this book is not intended as a spoof, correct? It’s not an incredibly understated parody?”
Archie shook his head.  “Rand’s an ex-Russki, pre-glasnost, and they don’t kid much. They’re not much into understatement, either. … When she says, ’And I mean it’ in the afterword, you can bet money she means it.”
“Jesus …so it really is then…”
“Really is what?”
“The anti-Communist Manifesto,” Joan said. “Das Kapital for capitalists, with chase scenes and heavy petting…”

The album: Withering Strands of Hope by Benumb 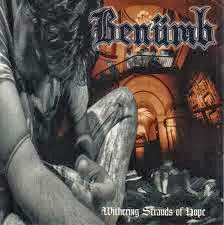 For all of grind's political sloganeering about the mechanisms of power being turned on the poor and the disenfranchised, nobody zeroed in on the economic concerns of the working class better than Benumb. Like some lame political functionary once said, "It's the economy, stupid." The California grind-violence collective had a financial reporter’s eye for the way the changing 21st Century economy was filling Wal-Mart’s shelves with cheap crap to buy at the expense of American jobs being shipped out to third world shitholes where impoverished populations would work for pennies on the dollar without the protection of labor laws or workers’ unions. Since the Clinton administration, free trade has meant many blue collar middle class families were free to watch their jobs get traded to Asia and South America. Benumb gave voice to their angst.

A representative song: “WTO: Disintegration of the Working Class”

Workers of the world unite!
Posted by Andrew Childers at 8:39 PM