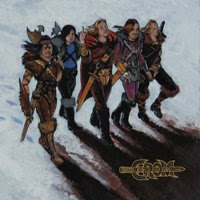 Crom
Hot Sumerian Nights
Underdogma Records
By Mitra, but it does my soul good to see these power violence barbarians Crom astride the lands of Hyboria again. After a seven year sojourn through Zingara, Shem and benighted Stygia where dusky skinned sorcerers make foul offerings to slithering gods, Crom return, having enlisted two more vagabonds in their freebooter brotherhood.
The might of their steely thews wields a broadsword of power violence, decapitating foes with thrash pillaged from the decadent Kingdom of Bay Area, before crushing the fallen under the metal shod hooves of a galloping charger named Iron Maiden. A soupcon of black metal alchemy wreathes our heroes’ legs like a foul wind from the blood pits of Thulsa Doom (who crossed swords with Kull the Atlantean but never met Conan in the R.E. Howard canon, it must be noted for +10 nerd points).
Overall, Hot Sumerian Nights stretches its mighty legs further than 2001’s Cocaine Wars, but the ratio of filler to actual songs has slipped a little out of whack. You’ll have to sit through two bombastic, deconstructed intro pieces before the first actual song, “Wee Hours of the Snowgoat” strangles the serpent Set with black metal rasp and some severely creeptastic exhalations. Despite their ubiquity, Crom’s choice of samples is inspired, with the expected Conan lifts before driving the Bad Brains, Warren Zevon and horrible ’80s piano ballads before them and listening to the lamentations of their women. But the songs that are there are a stone delight. Karl Sanders would probably sacrifice a nut to shadowy powers from beyond for the arabesque scrollwork riffs that lace the titular track before it heaves its way into the enVenomed follow up, “Worms of the Earth.”
While it’s great to have Crom, who injected some much needed levity into the oh-so-serious power violence scene in the ’90s return, the production is a little too crisp and the samples too overpowering at times, burying an album that could easily rival Cocaine Wars or even Lair of the Minotaur under layers of distracting noise.
Crom have indeed returned (also look for them on the upcoming This Comp Kills Fascists album), though a decade older, a little flabbier and slower by a step. But they could easily lace up their fur trimmed boots and regain their fighting form. All it takes is a barbarian training montage.
Posted by Andrew Childers at 7:10 PM

i heard this album, and it pretty much sucked. not recommended.