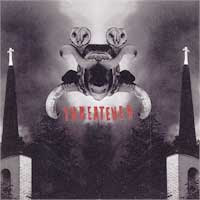 Threatener
The Hammering, the Fastening and the Bending of Throats
625 Thrash
Choruses are overrated. As are verses, bridges, and other traditional songwriting fuckery. Instead, Threatener trimmed all of the fat from their songs, allowing them to cram 47 fricken tunes and four radio promo spots into 28 minutes for this excellent retrospective.
These Ann Arbor stooges worked the twitchy pulsed demimonde between hardcore and straight out grind between 2003 and 2007, specializing in seconds long jabs to the kidneys. With songs this short, picking out individual tracks to highlight is pointless, but instead The Hammering functions as one relentless beatdown. For being recorded at different times, the songs have a seemless quality to their production, even the live tracks performed for WCBN (four little letters that gave frontman Roderick McClain tongue twisters between songs).
Throw in a three ’graph story that sounds like it could have broken free from the dark cellar where J.R. Hayes chains his insecurities, and you’ve got a tidy little package, courtesy of the excellent 625 Thrash, which is quickly making a name for itself snapping up obscure bands whose back catalogues deserve to see the light of day.
Posted by Andrew Childers at 6:45 PM