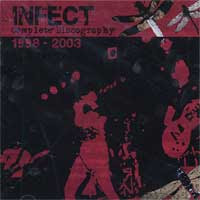 Infect
Complete Discography 1998-2003
625 Thrash
If you thought the only banging things to come out of Brazil were Sepultura, Ratos de Parao and Gisele Bundchen’s ass, then a listen to Infect discography is in order.
Compiling everything this all estrogen quintet set to tape during their five year lifespan, Complete Discography will not send your eardrums into spasms for its originality, but Infect snarled tune after tune of extremely well played hardcore. Napalm Death and Infest (only one letter off!) get inspirational shout outs in drummer Estela Homem’s liner notes and both of those influences are pronounced. But Infect, vocally especially, can also sit comfortably along side Antischism and Naked Aggression and just a touch of Melt-Banana.
I left my Portuguese phrasebook in my other pants, but I can make a fairly educated guess as to the topic of songs such as “Homofobia,” “Sociedade Masculina” and “Classe Dominante.” (Helpful translations are offered for curious Anglophones.) It also doesn’t hurt to note that these ladies’ anger, coming from a country noted for periodic political strife and extreme class stratification tends to make the rants of spoiled middle class American punks seem a tad bratty by comparison.
One fairly interesting detail to note is that instead of lining all the songs up chronologically, as with other discographies, Infect group multiple versions of the same song together, allowing to watch “Assessino,” “Se Aceite” or “Sendo Fogo” progress from demos to more robust and well rounded productions. The watery tune “Nova” helpfully comes labeled with “smashed,” “crashed” and “thrashed” versions.
Infect didn’t stray farm from hardcore’s well worn grooves: guitars scramble, drums pound out near-blast beat tempos and screams range from throaty diatribes to full on slasher film victim screeches. But Infect prove that teen aggression, political frustration and loud music are universal statements no matter the language.
Posted by Andrew Childers at 8:57 AM