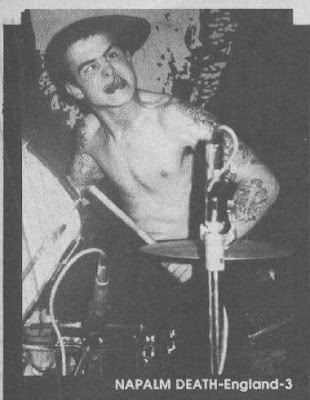 Oh Napalm Death, how do I love thee? Let me count the hundreds of dollars I’ve spent on your albums, shows and shirts over the last 16 years.
I’m not really a favorites kind of guy, but if I was pressed, I would say Scum, Harmony Corruption and even Smear Campaign rate as serious contenders for the desert island album list.
But that doesn’t mean I don’t occasionally roll my eyes when I crack their lyric sheets. Cuz if we’re all honest here, their rhetorical exploits have occasionally wandered into the realms of bad Live Journal poetry.
And since I’m coming to the foreseeable end of the Carcass Word of the Day shtick, I thought I’d turn my sights on another of grind’s pantheon because, as Abbie Hoffman sagely observed, “Sacred cow makes the best hamburger.”
It’s with that satirical mission, I hereby unveil the latest recurring feature where I’ll poke some gentle fun at what we can call Napalmisms, those lyrical tics that began with Scum and virally trailed through the band’s career before infecting their legion of imitators as well.

For our first lesson let’s all open the Gospel According to Beavis, turn with me to the chapter of Cornholio. Picture the seen with me if you will: a pretentious early ’90s coffee house as a Hank Rollins look alike belts out horrifically bad poetry, capped by the immortal line, “And then, my friend, YOU DIE!”
Kinda makes you wonder if some of Napalm Death’s earliest members ditched the whole grind hustle for cartoon scripting because the teen metalheads had similarly morbid sentiments and felt the need to emphasize that by slotting die/death at the end of their songs. On unfuckwithable classic Scum, they hit the trifecta, committing that sin in triplicate with two different line ups.
Exhibit A, one of my personal faves, “Instinct of Survival,” when ends on the rainbow and unicorn sentiment “Another product for you to buy/ You’ll keep paying until you die.”
Oh but death is a dish served reheated, so Napalm pulls the same sentiment outta the fridge and nukes it lukewarm just five tracks later on “Sacrifice.” Witness the lyrical go to move “The thoughts I had/ Are now denied/ And one day soon/ I hope you die.”
But lest you think the Steer/Dorian/Harris/Whiteley would eschew the same rhetorical flourish, “Divine Death” ends with, well, “divine death.”
And the boys were right back at it on the very next album, From Enslavement to Obliteration, with the single-word diatribe “Dead.” Luckily this particular Napalmism quickly petered out after that never to bge seen again to date.
So what should aspiring grind lyricists take away from this exercise? Ending songs on death/die/dead does not make you profound or ultra-morbid or edgy. It just makes me laugh at you, and then, my friend, YOU DIE!

Spot a likely Napalmism? Drop me a comment or shoot me an emai.
Posted by Andrew Childers at 11:16 AM