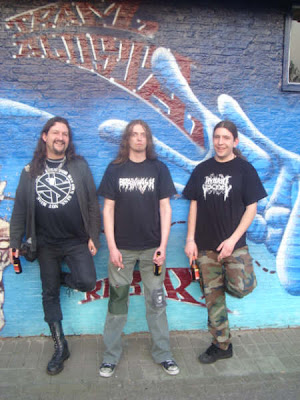 It’s an article of faith in the underground community that if you play in a crusty, punked out grind band, sooner or later you gotta do a split 7” with Agathocles. It’s in the friggen bylaws between black shirts (and the wearing thereof) and smiling (thou shalt not). I’ll wait while you go look it up.
For more than 20 years now the Belgian death squad has relentlessly beat out their own brand of lo-fi, stripped down grind, boasting more than 90 (!!!) split EPs and albums over their seemingly endless career with five more planned this month, according to band honcho Jan Frederickx, the sole fixed point in the ever shifting AG constellation.
Somewhere between King Leopold II’s depredation of the Congo (The horror! The horror!) and Jean-Claude Van Damme’s inexplicably ongoing career, Belgium chose to mitigate those crimes against humanity by birthing and nurturing Frederickx and his rotating band of merry men who have been kicking out killer grind (mince core in the band’s private nomenclature) for two decades.
“Doing split releases is a typical DIY punk thing. Split EP’s exists since the 70’s and some great split vinyl were made in the beginning of the 80’s such as Warfare/Upset Noise split 7”, Declino/Negazione split LP,” Frederickx said. “We like to keep that flame of cooperation alive. We like to share releases with everyone, except with those who promote macho-ism, sexism, snuff and bullshit like that. We shared vinyl with bands from all sorts of music like black metal, grind, ska punk, raw punk, anarcho folk, doom metal.”
Named for a Greek tyrant whose name became a byword for bloody conquest, AG have been banging out a bloody racket for 23 fricken years without the major label cash that has helped contemporaries such as Napalm Death pay the rent.. Instead, Agathocles have hopped from one miniscule label to another, sharing wax with a seemingly endless parade of punk, grind, metal and whatever else bands.
Despite my love of all things blast-beaty, I’ll go ahead and admit I was way late in getting to the Agathocles party simply because I was so overwhelmed by the sheer number of releases these lifers have under their belt. So big thanks to Self Made God for finally having the good sense to collect this band’s innumerable output on a series of Mincecore History discogs a few years ago.
At a time when metal seems to be determined to repeat the worst aspects of the hairspray/thrash bust of the early ’90s when big money flowed easy and bands got lazy, it’s impressive to someone steadfastly stick to a DIY ethic despite the pitfalls.
The term lifer often gets thrown out to describe someone like Lemmy Kilmister who never seems to age and has no intentions of retiring. But it’s pretty easy to be a lifer on a label’s dime.
“Grind is not about being on a big label! It’s totally the opposite,” Frederickx said. “Grind is punk and punk in its true form is DIY, autonomy, creating another way, opposing mainstream. And that’s the way we will always work. I don’t give a shit about big labels and the puppets that are signed to them. GRIND IS PROTEST!”
Which just happens to be the name of AG’s upcoming full length. When will it be out, I ask. “When it’s done,” Frederickx responds. This has been yet another instalment of obvious answers to stupid questions.
Given Agathocles’ fiercely DIY shtick, I ask Frederickx how the intertubes help or hinder a go-it-alone grind band’s attempts to connect with fans in a highly commercialized environment. In response, he sent me back the lyrics to “New (De)Generation” with its shades of Carcass circa “Polarized:”

Dude doesn’t mince words. But just to be safe, nobody show him this.
Posted by Andrew Childers at 9:55 AM

Awesome fucking band, they really epitomize what "grind" really is.