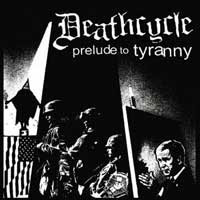 Deathcycle
Prelude to Tyranny
Lifeline
I think we can all agree no matter who takes the oath of office January 20, it will be a relief knowing the era when mindlessly slapping a black and white mug of Georgie W. on the cover of your album was an considered an adequate substitute for actually having to offer some original commentary inside. Not that I’m sticking up for the authoritarian fuck, I’m just saying I’ve seen his simian smile on the cover of way too many wannabe political albums over the last 7.5 years.
New York killing crew Deathcyle, featuring members of Kill Your Idols, Neglect and None More Black, take the artistically lazy way out on second album Prelude to Tyranny, a well played if slightly past-its-sell-by-date collection of rough throated hardcore antics. There’s nothing hear you haven’t heard a million times before, solid Motorhead-meets-Discharge-with-a-dab-of-New-Yawk-stomp punk antics that round up the usual political suspects and march them before the wall and fire shopworn declamations against state violence and state control at them ad nauseum.
But as much as I wanted to hate them album just based on the list of required reading web sites on the album sleeve (Save the Internet – Yay; ridiculous 9/11 tr00fer sites – Boo), I have to admit some of the the songs are deceptively catchy, mixing fulminating rock fretboard work and a driving rhythm section work.
Aside from the stridently pedestrian politics, my real deal-breaker complaint is frontman Ron’s vocals are as monochromatic as the artwork, a hoarse, generic hardcore bark that could easily be shopped to any NYC bro down band if this whole poli-punk thing falls apart.
His one trick pony delivery makes the tired tirades all the more grating. If you write a tune called “Another Song” that proclaims it is “another song that can’t be bought/ by corporations with no heart” you might wanna spend a little extra writing time to guarantee it doesn’t sound like just another damn hardcore song. In fact, I couldn’t imagine anything more assembly line produced than this collection of 11 well played but ultimately forgettable hardcore songs.
Posted by Andrew Childers at 1:15 PM

I agree the lyrics are probably the weakest part of this record. But I think as a whole this album is awesome. The vocal delivery grew on me after a while.