When Jon Chang got the crazy idea to expand Compiling Autumn from a series of blog posts (my plan) to a short book (his plan), we talked about adding a few extras to ensure you all got your money's worth. Unfortunately, a lot of our plans just didn't pan out. Among our brainfarts was including a complete tablature for The Inalienable Dreamless. However, the printer just wasn't equipped to handle that.
Anyone who has read Chang's liner notes to the reissued versions of Jouhou and Original Sound Version knows that guitarist Rob Marton had a ... unique ... approach to tabbing out his songs. The various riffs were referred to as "grind parts" or "Slayer parts" rather than getting mapped out in conventional musical notations. Pity stand in Steve Procopio who periodically filled the guitar slot and had to make some sense of Marton's direction.
So in what is very likely a first, Discordance Axis have pulled together band-approved tabs of several songs from all phases of their career (complete with helpful/sarcastic side notes), which I'll be posting each Friday. And there's no better place to start than TID's infamous opener "Castration Rite." 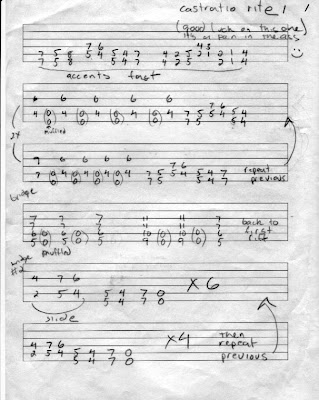 Posted by Andrew Childers at 7:33 PM

Holy fuck Batman! This is the coolest thing I've ever seen! Guitarists all over the world are crying tears of joy.

Very cool, you're the Peter Parker to Discordance Axis's Spiderman. I love seeing inside things like this, and I'm also happy to know people refer to music in such seemingly vague, but also right to the point ways. If I were to write a song it'd be Celtic Frost to Slayer to Grind parts.

This is great. Ever since I saw the tiny pictures of these tabs as sidebar material in Decibel's The Inalienable Dreamless story, I've been hoping they'd someday get released in a readable form. That day was yesterday/sixteen more Fridays to come.

Weren't these tabs on the Pikadourei DVD?

not sure bokeh. jon made it sound like he had to hold rob down at gunpoint to get it done. maybe. either way, it's just interesting to get a peek behind the curtain.

For anyone wondering I think the guitar here is tuned to DADGBE.

Yeah the tuning is Drop D. Worth mentioning. Thanks for this. I've trawled though Pikadoru several times coppying the tabs by hand. Now I can just kee them on my coputer.

Made a guitar pro file for it if anyone's interested. Haven't put any drums to it, but I'll do that later: http://www.mediafire.com/?31ubi9y9b5wuw3p

Looking forward to "End of Rebirth."