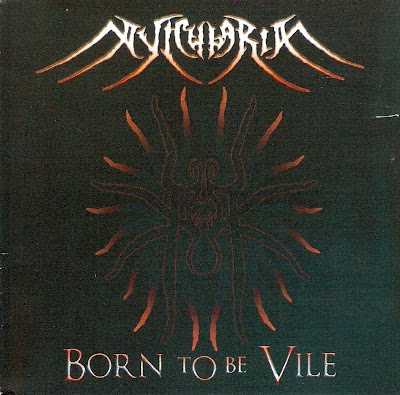 Avicularia
Born to be Vile
Croatia Records
The great philosopher Marx – either Karl or Groucho, take your pick – once opined that “history repeats itself, first as tragedy then as farce.”
Case in point, back when I was in college a decade ago we were plagued by obnoxious Phish heads who thought they were the reincarnation of the ’60s. As though the decade that gave us the self absorbed shit stains we call the Baby Boomers needed to be revisited. Remember Woodstock 2 and 3? (MTV probably would appreciate it if you didn’t.)
Cheap nostalgia wasn’t the curse of my generation solely. Currently, my wife’s cousin attends the same college I did and she’s walking around dressed like an extra from a John Hughes film with nary a trace of irony as only someone who didn’t actually live through the ’80s could do.
Croatian spider obsessives Avicularia have a serious jones for the ’90s, particularly when death metal face planted into tech. Their sound splits the difference between mid-era Dying Fetus and pre-suckage Cryptopsy (None Born to be More Vile?), pile driving their crunchy death metal peanut butter into the rich, creamy chocolate of technique with some mixed results. You already know what most of Born to be Vile sounds like before note one, horrific typewriter drumming and all.
If Avicularia could keep their eyes front and center, though, they may actually be on to something. A late bloomer of an album, Avicularia chase an intro and five serviceable but unspectacular songs of Nile bombast with two closing mindfucks of vision and accomplishment. The aptly titled “Spiraling Doom” swirls through lightly plucked passages of odd time signatures, creeping arachnid melodies and crashing Neurosis peaks and valleys. Kiss off song “Requiem for Ego” is even more transcendent, one of the best and most engaging death metal songs I’ve heard this year with its piercing, affecting lead guitars, crabbed rhythms and restrained, pounding drumming. Its strength lies in its cleaner, moody bridge that manages to sound both spontaneous and ethereal as it gives way to a vibrant cello conclusion.
There’s no doubt Avicularia is full of talented musicians who can bring a crushing death metal tune. All they need to do now is pull themselves out of the ’90s and start looking forward. The pieces are there and just need the proper alignment.

[Full disclosure: Avicularia kindly sent me a copy of their album.]
Posted by Andrew Childers at 7:03 PM