Grind in Rewind 2009: The Legacy League

Is it just me or has then been a fairly crappy year for punk and hardcore? Given that the pickings are so slim (and that I’ve yet to pick up the new BBTS, Weekend Nachos or Converge), I’m going to crown Wolfbrigade as this year’s prom queen and move on with a special jury prize going to Infernal Stronghold for their frost encrusted... umm ... crust. So in lieu of a d-beat retrospective and before we get to the real countdown, I decided to take a moment out to recognize the geezers of grind: those legacy bands that have been kicking around with greater and lesser degrees of success and decided to either reunite or just drop a new album in 2009. 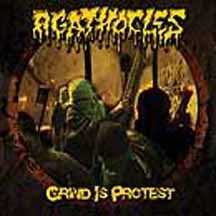 5. Agathocles
Grind is Protest
Dis-Order
In a vain attempt to give the jingoistic hysteria and reflexive racism that characterized post-war American conservatism a patina of intellectual sheen, William F. Buckley wrote in the mission statement to his magazine National Review that the conservative was the person who “stands athwart history, yelling Stop.” Agathocles are the very kind of unrepentant liberal agitators that drove Buckley up the wall, but their music is the living embodiment of Buckley’s sentiments. The Belgians stand athwart musical history somewhere around 1989 yelling “Stop!” Grind is Protest is is largely indistinguishable from prior output from the band, and that’s just how they intend it. Mainstay Jan Frederickx has switched from bass to guitar and while some of his riffs may not flow as smoothly as past six stringers, the sincerity of conviction is the same. This may not be Frederickx’s Jericho moment, but it sure sounds like the thinks he can “tear down the walls of the ministries of arms” through grindcore alone. 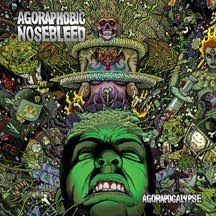 4. Agoraphobic Nosebleed
Agorapocalypse
Relapse
Sure, ANb is not quite as legacy as some of those on this list, but with Anal Cunt, Agoraphobic Nosebleed, Pig Destroyer, Japanese Torture Comedy Hour and solo work, it seems like Scott Hull has been a vital grind force since time immemorial. And dude is not done pitching curve balls to the slavering masses. Ditto ex-Enemy Soil/current Drugs of Faith mainman Richard Johnson. The lightbulb moment for Agorapocalypse came not when I was listening to the album itself. Rather I was spinning ANb’s cover of C.O.C.’s “Hungry Child” from the Bestial Machinery collection when it struck me: with the longer songs and slower tempos, ANb had just made an electro-crossover record. It was a clever move from cagey veterans who have pretty much defined extremity for grindcore for the last decade. The only thing that really held Agorapocalypse back from ruling my year was the staggering decline in the humor (though I missed the best joke on the album the first go-round). While the split with The Endless Blockade shows J. Randall’s id can be just as twistedly illuminating as ever, it seems like the band took advantage of new singer Katherine Katz and her spare X chromosome to wallow in misogynistic humor with the convenient “hey but we have a woman singer” excuse (close cousin of the “I have black friends” defense). It was an annoying step backwards from a normally stellar band, but one that feels temporary. 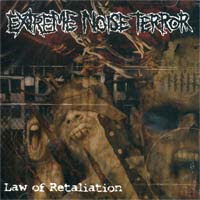 3. Extreme Noise Terror
Law of Retaliation
Deepsix/Osmose
Extreme Noise Terror’s latest slab o’ grindy goodness is a lot like reuniting with a beloved old friend you haven’t seen in ages. While your relationship may have warped during the years of absence and a lot of those stories are starting to blur and sound the same, there’s a convivial familiarity that glosses over those lapses. That’s what frontman Phil Vane brought to the British bastards with his return to the fold. After about a decade of wandering through the metal wilderness (what is it with British grind bands and the need to expand their horizons halfway through their careers?) Extreme Noise Terror locked and loaded more than half an hour of tooth chipping grindcore that may not quite reach their teen angst inception but recalls all those good times you used to have. Sure, your long lost college friend may crash through your coffee table and maybe he’ll miss the can when pukes in your bathroom, but it’s all cool. You’ve got history. 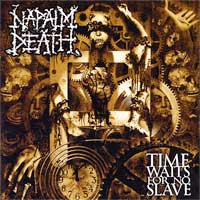 2. Napalm Death
Time Waits for No Slave
Century Media
Napalm Death jettisoned the annoying cameos and noodling experiments that slowly creeped back into their repertoire since signing with Century Media on 13th studio album Time Waits for No Slave, but for all that the album still felt a tad slower less vital than predecessor Smear Campaign. But that’s a relative measure because these Birmingham bastards could write a grind album that slays most comers on their way to breakfast. While Time Waits for No Slave may have dragged in spots, it still feels momentous and even transitional for a band that’s worn many masks through its various incarnations. The flashes of Amebix and even Voivod that have peeked around corners on previous albums have been given free rein on Time Waits for No Slave, the band’s most successful experiment since Fear, Emptiness, Despair. That the lineup of Greenway/Harris/Embury/Herrera, which has been together for nearly two decades, can still find ways to innovate and experiment in a field as self-restricting as grindcore is a welcome cementing of their hard earned pride of place. 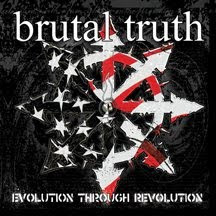 1. Brutal Truth
Evolution Through Revolution
Relapse
There’s a manic, anarchic energy to Brutal Truth’s triumphant victory lap Evolution Through Revolution. It’s as though the Marx Brothers decided to record a grindcore album. It’s a sense of chaos I’ve never really associated with the New York band. For all their far flung experimenting and gallivants to musical extremes, their performance as tightly focused as though they had a need to control (see what I did there?) their surroundings. But Evolution Through Revolution brings the same anarchic body bomb assault that drummer Rich Hoax has been exorcising with Total Fucking Destruction. Don’t discount the introduction of Rochester fixture Erik Burke either. Not too many guitarists could fill Gurn’s pick hand but Burke has been bringing the weird for more than a decade first with Lethargy and then with Sulaco (with a detour to drum for Kalibas between). A pioneering press past what we previously thought was grindcore’s frontier, Evolution Through Revolution is pretty much a masterpiece from a band that’s got an album or two already worthy of the title.
Posted by Andrew Childers at 6:47 PM

AARPcore! The best thing about Agathocles is that it was an actual album instead of yet another 7".