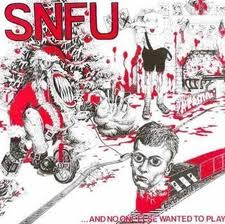 SNFU
…And No One Else Wanted to Play
BYO Records
1984
Given that it’s the Christmas season, I just want to address something that has been festering for decades now: fuck all the Whos down in Whoville, the tall and the small. Fuck who hash, fuck roast beast and fuck Cindy Lou Who who was no more than two.
You see, I get pissed each and every year when the Grinch goes soft because those fucking Whos have it coming. They create an ear piercing racket annoying their neighbor three miles away and for some reason he’s the asshole? It’s called a fucking noise ordinance violation. You’re just lucky he only stole your Christmas presents rather than suing those antennae things off the Whos’ heads and foreclosing on the whole fucking town.
So in my shriveled, bitter heart, nothing really speaks to my yuletide malaise like the cover of Canadian skate punks SNFU’s debut record …And No One Else Wanted to Play. Christ, this is such a fucking great album. I can go for months without even thinking about it, but once I put it on, it’s easily a top 20 lifetime favorite kind of album. Not as bratty as the Circle Jerks, not a pointlessly goofy as Angry Samoans, frontman Chi Pig’s sardonic delivery and wry and hysterical lyrics circle pit with the Brothers Belke’s guitarmageddon – the rhythm section rotated almost as often as Naked Aggression’s – to soundtrack a perfectly wasted summer with your skate rat friends. The songs have that punk simplicity paired with a just-short-of-doubled-picked thrash crunch that set them apart from their contemporaries. And metal heads may want to give the bass and drum opener of “Seeing Life Through the Bottom of a Bottle” because it may actually be the genesis of Carcass’ oft-copied “Ruptured in Purulence” riff.

SNFU – “Seeing Life Through the Bottom of a Bottle”

But more importantly, SNFU brought a slyly subversive sense of humor on the feminist-minded cafeteria jibe of “She’s Not on the Menu” or mystery meat ode to the “Cannibal Café,” which also highlights Chi Pig’s artful dodger way with the tongue twister lyrics.

Unfortunately, that humor would degrade over time after the band jumped to Epitaph and started churning out less satisfying songs about the celebrity twat of the week (yay, a John Bobbit song. That will be totally topical 15 years later. Oh wait.). But … And No One Else Wanted to Play remains a seminal punk touchstone in my life. This is an album that nails everything punk should be: it’s hilarious, fun and played with a teenage abandon. I’m not generally the kind of person who looks back fondly on the teen years as the best days of my life, but throwing this on is almost enough to put me in what passes for the Christmas spirit.
Posted by Andrew Childers at 8:09 AM

Labels: ...and no one else wanted to play, byo records, canada, punk, punk as fuck, snfu

And Merry Christmas to you Mr.Childers, I highly recommend you check out Vitamin-X, I am yet to hear a more energetic youthful punk.

Awesome! punkin it up edmonton style!!! I freakin love the first 3 snfu records! MEET THE GRAVEDIGGER....HIS ICY TOUCH WILL GIVE YOU THE FUCK-IN CREEPS!

I've listened to this record a ton. Angryholic nailed it with the quote above—that was the first line that came to my mind too!

also, i put in my plug for those first three records as well, but don't forget the awesome return to form that was the post-epitaph ping pong EP. i could listen to "quentin tarantino can't act" on endless repeat for most of the day.

it's posts like this that keep me lovin' this blog. i've had me a punk-as-fuck xmas. peace.

well thanks for the kind words. hopefully i can make your time worthwhile with my ramblings.