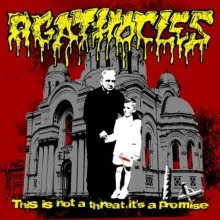 Agathocles
This is Not a Threat, It’s a Promise
Selfmadegod
Agathocles not only groove out to reggae’s lackadaisical lope, but the mincecore institution manages to do it while paying homage to Belgian fastcore unit Ronald Ruck’s anti-Lacoste jam “God Save the Real Green Crocodile” as they slouch along like the Bad Brains on simmer. Jan Frederickx’s accent even sounds vaguely Jamaican as the song drifts from punk romp to reggae slide.

Unforgiveably comma spliced though it may be, This is Not a Threat, It’s a Promise finds the Flemish institution stretching the proverbial legs a little, limbering up the hamstrings and working out the old anterior cruciate ligament in the name of grind, punk, hardcore, reggae and even some noisy Neurosis clash on the abrading “Motherfucker (Swing That Axe).” It’s all tied together by mainstay Jan Frederickx’s distinctive snarl. For those who prefer their Agathocles more traditional, “Aside” rides a dive bombing whine while “Bits and Chips” could easily be the twin of Grind is Protest’s “Ministry of Arms.” Hey, let’s see you write a bazillion songs without recycling an idea or two.
At this point do you really need another Agathocles record? Probably not, but if you’re in the mood, This is Not a Threat, It’s a Promise is one of the band’s more well rounded collections of music. A quarter century on, the band can still surprise.
Posted by Andrew Childers at 8:25 PM

Labels: agathocles, belgium, grindcore, mincecore, reggae, reviews, selfhate, selfmadegod, this is not a threat it's a promise

I have to say I was pleased with this release, still not sure whether it will make the cut of the best of the year, but we will see.

I need to check these guys out further.

Like Dessicated Veins said of Napalm Death, they're just so ubiquitous I avoided them for a while.

Also, fuck that album title. I hate that phrase. "Whew, it's just a promise. I was afraid it was a threat!"

What's next? Napalm Death's "I'm Just Sayin'?" Or Extreme Noise Terror's "The Consequences Will Never be the Same?"

I know, I know, the Agats dudes' English is way better than my any-other-language.

"after much collaborative discussion this is our helpful suggestion that we'd greatly appreciate you taking under advisory and to which you might give some serious consideration. we appreciate your attention to this matter"

I want to start a grind band called Witness My Hand and just spout legalese in lieu of lyrics.

Look for our debut 7 inch "Know All Men by these Presents" due out within a period of not less than one year and one day and not to exceed ten years from now.

make sure you use dispositive as often as possible. that is not a word i had ever had recourse to use until my job gave me a crash course in statutory law. that and that funny little symbol for "section."

all this talk of lawcore makes me think of hewhocorrupts.

check out master of profits, one of the best music videos ever.

@ Andrew: I use the section symbol so much I've had a macro recorded on my laptop for it since the first year of law school.

Unforeseeability is one of my favorites, since no spellchecker will respect that word. It has a the squiggly red line of shame in this window, too.

@ Fish Monogram: I actually laughed out loud. That was fucking righteous.

On topic: I guess this Agathocles album is as good a place as any to branch out into their catalog, eh? So far I've only heard really early stuff, and all I actually own is their split with World Downfall.

I think the section symbol is two S's mating.

yeah bill i'd say this is their most complete album in years. but if you mosey over to cephalochromoscope, orfee just put up an early compilation that's a great place to start.

i also keep a file on my desktop of bizarre symbols i have to use, section and microgram being the most common.

Of all things, I forgot to put any links yesterday, but it's up now...

Nice! I didn't know they even had a new record. It's not like I'm surprised, though; they could release a new one tomorrow, and I'd just be like, "Oh, cool. Maybe I'll download that some time." Also, that song is SICK when it gets into the actual reggae section. I was just watching this documentary about how the Clash integrated dub into their sound, so this is appropriate.

P.S. That's obviously not what the whole documentary was about, just a section of it. But still, it was cool because dub is awesome.