There was a man by the name of Thorvarld who was the son of Asvald Ulfsson. Thorvald’s son was called Eirik the Red, and both father and son left Jadri in Norway for Iceland because of some killings. 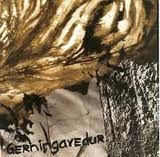 Forgardur Helvetis
Gerningavedur
Blastbeat Mailmurder
2002 [Re-released in 2007]
Of the all the things you, the faithful listener, have come to expect from card carrying members of the grindcore musicians’ union, stopping an album for nearly two minutes of gravely chanted poetry is probably not one of them. But there it is on Icelanders Forgardur Helvetis’s 2002 album Gerningavedur: penultimate track “Heljarslod” is deliberately-paced poetry, read in the lilting accents and stern cadences I’ve come to associate with Ingmar Bergman’s stoic black and white meditations on human alienation and the absence of God.
While my Icelandic may not be sufficient to decipher what the tiny Atlantic isle’s sole grindcore ambassadors are raving about on their 21 other songs, I’ve spent enough time studying the sagas and Eddas to have a small glimpse of the importance of poetry in Norse culture. Egil Skallagrimsson retained his head thanks to the felicity of his words. While “Heljarslod” felt awkward at first, its place and importance grew on me with subsequent listens. Now I think it needs to be there, an emotional anchor to the blood eagle brutality of the music.
Musically, Forgardur Helvetis hit all the expected notes: the blastbeats are on point, the riffs have a distinctive Scandinavian air as though the earliest At the Gates material were being reinterpreted by Creation is Crucifixion and the vocals are impassioned. But there’s also a breasting dragon ship bravado to their song construction that suggests they have Viking-era Bathory albums lurking in their plundered record collection (They also cover Dark Throne’s “Undir Utfarartungli” aka "Under A Funeral Moon"). The songs won’t win many awards for memorability, but they serve their purpose. However, though it’s only 31 minutes long, Gerningavedur just feels longer. There’s definitely about 10 minutes worth of fluff that could have been given a Viking funeral before release. Despite that, it’s entertaining to get an album from a rarely heard from corner of the Scandi-grind community.

“Gerningavedur” is still available on CD with translation of the lyrics from icelandic to english and the bonus DARKTHONE cover "Under A Funeral Moon" !

how did dephosphorus strike you btw? i'm especially curious to get your perspective.

I'll have to give it more spins to come up with more than that, but initially I can say that I enjoy its nebulousness. That might fade once I become more familiar with the music, but there is a mystique there that is hard to pin down. They try to do a lot of things grindcore "shouldn't" be doing, and they pretty much just pull it the fuck right off.

I don't feel like I'll fully appreciate the album until I have arranged for a mosh pit in a stone circle and plenty of mood enhancing compounds, robes, and torches.

Also, I think if they opened for Neurosis I'd transubstantiate.

whoa. i'm not picturing them collaborating on a version of "stones from the sky."

@ Mr. Childers: Did you mean "now picturing?" Because that would be fucking incredible.

pay no attention to the man behind the curtain.