You could strike sparks anywhere. There was a fantastic universal sense that whatever we were doing was right, that we were winning…. And that, I think, was the handle – that sense of inevitable victory over the forces of Old and Evil. Not in any mean or military sense; we didn’t need that. Our energy would simply prevail. There was no point in fighting – on our side or theirs. We had all the momentum; we were riding the crest of a high and beautiful wave…. So now, less than five years later, you can go up on a steep hill in Las Vegas and look West, and with the right kind of eyes you can almost see the high-water mark – that place where the wave finally broke and rolled back. 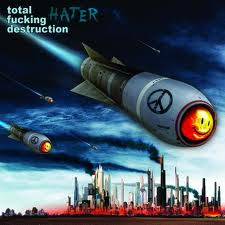 Total Fucking Destruction
Hater
Translation Loss
Three albums in, Total Fucking Destruction have established themselves as grindcore trickster messiahs. Shifty shamans dealing slippery truths, the band has evolved far beyond being Rich Hoak’s yoga routine during Brutal Truth hiatuses (hiati?). So the most surprising curveball served up by third album Hater is just how straightforward it is. No acoustic odes. No yoga-jazz freakouts. Just 27 spastic lashings of freakazoid Hunter Thompson grind that burrow straight for the pineal gland. Total Fucking Destruction has always relied on sly, snide social commentary draped in a near-Buddhist need for repetition and mantra. Hater finds the band slimming everything down to the deceptively simple koan at each song’s core. The only digression from the grindcore center is a distinct rock swing that propels songs like “Hate Mongering Pig Pandemonium” and “Everything You Need But Nothing You Want.” “I Not Pose” gets that droney, repetition thing just right while “Time Theft” is the auditory distillation of the schizophrenic hallucination that perfectly represents Hater’s amazing charms.
Where too many bands are content to wallow in unimaginative repetition of grindcore tropes past, there’s always something expansive, explosive and challenging about Total Fucking Destruction’s full commitment, body bomb art. While they may have finished dead last in the grindcore tournament, TFD’s all gonzo assaults have resonated (resin-ated?) with me more than Brutal Truth’s post-reunion offerings. If you’ve panned them in the past, Hater could be the gateway drug to Total Fucking Destruction’s grindfreak railroad.

[Full disclosure: the label provided me with a download.]
Posted by Andrew Childers at 7:54 PM

I may check it out, but I'm usually unimpressed.

This album fucking sucks, and this band just keeps getting worse. Not my thing.

i don't get why tfd is so polarizing. i think they're one of the more interesting bands working. even when their experiments fail, it's a unique experience.

any of you haters (ha!) care to elaborate? i'm genuinely curious at the antipathy.

I'm completely with you on this Andrew -- it's definitely their best album. Repeat, repeatedly.

I actually think Rich would delight in the fact that TFD is so polarizing. It might be his goal. He has a terrific sense of humor and it comes through in his songwriting...

There are some haters out there who claim he can't drum which is one of the most ludicrous thing I've ever heard. I don't give them much thought.

That said, TFD was never designed to appeal to everyone.