Panic! At the Discography: Nasum

Grindcore is the petit four of punk and metal. It’s a delicacy best served in small amounts. That’s why when I asked you to name the best band working today, you overwhelmingly went for a group with a penchant for albums shorter than a Harvey Birdman episode. Given that you probably don’t spend as much time woodshopping a song like, say, “You Suffer,” as long as you would something by Atheist or Pestilence or some other technical guitar wanker, that means an average grind band can pretty much poop out a 7-inch’s worth of material a month if quality control isn't a high priority (*cough* Agathocles *cough*). And if your average grind band keeps at it long enough, inevitably somebody is going to step in to collect the far flung singles, splits, and 7-inchers into a massive discography album. But a discography is probably the worst format for grind ever conceived by the diabolical mind of Jesus for a whole host of reasons. So with that in mind, I’m going to periodically dig through my daunting stack of oversized grind compilations to talk about what works well and how they, unfortunately, go tragically wrong more often than not. I could think of no better way to inaugurate the new feature than with probably the gold standard for grindcore discographies. 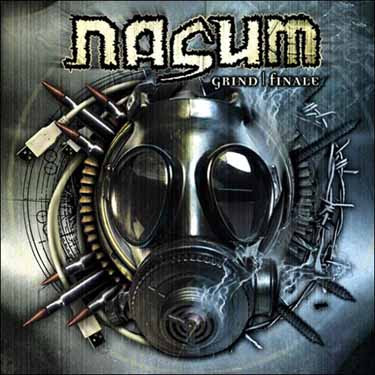 Nasum
Grind Finale
Relapse
2006
Mieszko Talarczyk’s death during the 2004 Christmas tsunami was the tragic impetus both Relapse and drummer Anders Jakobson needed to get off their asses and finally realize the long simmering Nasum discography, which had been percolating for years under the title Blueprint for Extinction. Two years and a (welcome) name change later and Relapse handed us 152 tracks spread over two discs that spanned Nasum’s amazing career in the form of Grind Finale. Not only was it a tribute to one of the label’s most prolific (and likely most profitable) artists, but Grind Finale was an impressive bit of fan service and an incredible undertaking in its own right. Packaged in a book binding with a forward by metal historian and Decibel EiC Albert Mudrian and featuring extensive liner notes by Jakobson that illuminate all of the band’s non-album releases, Grind Finale is the discography by which every other collection should be judged. The songs, ordered chronologically, begin with the band’s earliest incarnation, before Talarczyk stepped to the mic or manned the mixing board to put his indelible stamp on every facet of Nasum’s identity. Beginning with the sampled secret of the band’s nasal nomenclature straight through the cast off bits that didn’t make their later albums, attentive grindcore archeologists will be able to piece together not only the band’s musical evolution but perhaps psychoanalyze its working methods. Though the non-album and bonus track bits are almost uniformly quality songs in their own right, with enough listens you begin to see why, for instance, the title track for masterwork Helvete got left on the cutting room floor. You sense how the band carefully managed not only the individual songs, but how their albums flowed and the emotional punctuation that delineated them. It’s just one more example of how Talarczyk and Jakobson and their rotating cast of supporting players were master craftsmen whose career was prematurely ended.
Grind Finale is such an impressive package that Relapse’s decision to cough up the slapdash live album Doombringer two years later looks shabby and tacky by comparison, a cheap cash in on a vital band’s legacy. But Grind Finale is a fitting monument to one of the finest grind practitioners to ever grace our stereos and an essential addition to any Nasum fan's collection. Or a great place for n00bs to get introduced to master technicians.
Posted by Andrew Childers at 8:52 PM

I remember blasting this all the way through on a really long drive right after receiving it. It was a hell of a lot of fun to listen to the band evolve from the heavy death-metal influence of the earliest stuff through crusty grind into basically being the Michael Jordan of grindcore.

"the michael jordan of grindcore"

i may switch that to the gretzky, but i'm so stealing that too.

I stole it from a friend at another music site, myself!

I would have rather used Vitali Klitschko or Muhammad Ali, but the way he put it had a nice ring.

Another prime example of Nasums fame with an odd twist is if you type Nasum into the likes of google or better still ebay. 99% of the items they are offering to sell have no connection to Nasum, except being grind, and people using the word to coerce many of the Nasum lovers to purchase their merch or cds. Sadly this highlights the business manipulation of Nasum's fame.
As Discogs go this is the best, although if you like Archagathus like myself I recommend their Mincecore Fever. And I am contemplating getting the Looking for An Answer Discog, called split the suffering split the pain, got into both bands late in the game, yet love their material.

GF is an amazing discog collection... and fitting tribute to one of the most defining grind bands.

i also enjoy doombringer for completely different reasons... i think the sheer length of GF is slightly off-putting when considering a dose of nasum on the train to work.

my objection to doombringer is that it felt like a cash grab. the music is fine but as a whole it really adds nothing new after GF. especially when you find out the songs were taken out of order and rearranged so it's not a true nasum live experience. i'd much rather relapse had added it to GF as an alternate third disc package the way they did with the disembowelent discog.