You Grind…But Why?: No Gang Colors

Grindcore’s Overton window has been shifting the last few years as exotic influences have been metastasizing through its blastbeat and punk routine as bands like No Gang Colors have been grafting new parts to grind’s creaky chassis. Parts like hip hop samples and attitude. Joseph Ohegyi, half of No Gang Colors, said it’s simply an extension of his broadminded musical palette seeping into and informing his grind outlook. 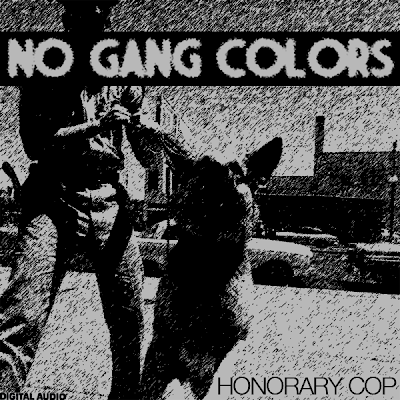 “It was a steady progression of taste from general metal styles to the varied extreme metal genres,” he said. “Finding out about new bands through my interest in other bands, leading me through a loose series of phases that amounted to something like: heavy metal -> nu metal -> metalcore -> grindcore -> death metal -> deathcore -> black metal (excepting the non-metal styles I am or was into). Excursions into grindcore introduced me to Pig Destroyer, who are arguably my favorite band, and Agoraphobic Nosebleed. These bands had a big influence over my then-maturing, slightly-drugged outlook. There's an aesthetic confidence behind both projects, a singular sound and style that I was also hearing in some of the older music I was getting into at the time (Brian Eno, David Bowie, The Beach Boys). I read some interviews with J.R. Hayes and he was mentioning his influences from all types of genres (Hank Williams, Geto Boys, Bjork), which was really inspiring. That he could be at the creative apex of his genre and have all these un-metal tastes and influences showed me that it was ok or even preferable not to be so focused on one style. Grindcore's lyrical style was also a crucial influence on me. Lyrically ANb and PxDx (and DxAx among others) were way beyond anyone not making rap. There's a directness and pragmatic meaning/intent in their lyrics that some of the more fantastical or allegorical lyric styles in metal just didn't compare to. They were grounded in the real world and their own experiences more than the escapist fantasies of other styles. I started experimenting with writing grindcore around the same time, more out of a fanatical impulse to mimic these bands (and others like Genghis Tron) than any type of creatively-driven impulse. Then the sound started developing and I found it integrated well with other styles I like, so I've stuck with it. Now it's more of a compositional tool, used to convey specific moods or themes, rather than a style I'm fully immersed in.”
Posted by Andrew Childers at 7:32 PM

Labels: grindcore, no gang colors, you grind but why