For their third and final full length, 2004's Lifetime of Gray Skies, Anodyne, like peers Lickgoldensky, made the leap from Escape Artist to Level Plane Records looking for a change of musical scenery. Level Plane owner Greg Drudy was looking to expand his label's niche beyond screamo to include other offshoots of the punk family tree.
"Around that time Greg was working with bands like Coliseum as well. Coliseum is further away from being a screamo band than we were," guitarist and vocalist Mike Hill said. "I feel like at the time Greg was trying to expand away from emo and that kind of trip. His musical interests were expanding."
Though Anodyne had leaped to a new label, the songwriting process remained consistent. Riffs and songs were intensely workshopped and improved through intensive and laborious rehearsals.
"We approached writing the same as the previous two records, just trying to create something we were into, always attempting to build something more expansive," drummer Joel Stallings said. "By this point we had been touring like crazy, so I think that lifestyle fed into the writing, and our strengths as players."
Lifetime of Gray Skies was recorded at Telefunken Studios in Connecticut in 2004 as Anodyne were gearing up for their first European tour.
"It was a fairly intense time," bassist Joshua Scott said. "My job was winding down. We were trying to find the best place to record, playing shows, screening record covers, and getting ready for Europe. I think we left for the European tour a week or less after we finished recording and mixing the record. I also was called for jury duty somewhere in there. As usual, the studio situation was fucked up. We had chosen a studio in Connecticut on the advice of our friend and because of their tape machine. The studio manager didn’t even have it set up when we got there. We wasted a day straightening that shit out, and then were told we had a 10 pm curfew on noise, not what we had been told when we were scheduling shit. Joel and I finished our takes the next day and took the bus back to [New York] to finish out our jobs. When we returned later in the week, Mike and the other engineer had pretty much mixed it, and we just listened to the finals, which is fine with me. It’s a process I have little tolerance for."

For art, Anodyne once again enlisted Coliseum's Ryan Patterson, who focused on 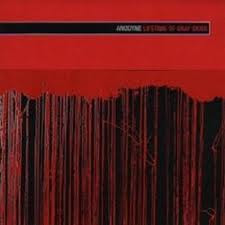 capturing visually the band's city-bred sound.
"For Lifetime Of Gray Skies I know that the urban/city vibe was to be a part of it. Anodyne and all of Mike's bands are so quintessentially New York to me, heavy and dark, bleak and overwhelming, cold like concrete. So I think that's what we were going for with the Lifetime design," he said. "I know that I originally did a cover draft with an image from Pasolini's Accattone film, Pasolini directed Salo and both Mike and I were fans of his work, but the image had also been used on another record that Mike had seen on tour so we scrapped that cover and started again from scratch. I like that the layout is fairly abstract, the pieces of red string come down and unfold to appear to be rain on the city lights on the back panel of the booklet. I really dig the silver lined box on the front cover with the silver and red band name and album title. I really enjoy clean text and artwork but rarely get the opportunity to do it. I was very disappointed with CD version of the layout, the registration was off on most of the red and it really bothered me, but the LP turned out perfectly."
From the music through the visual presentation, Lifetime Gray Skies would be a 13 song encapsulation of everything Anodyne had been striving for sonically and lyrically throughout their career. It's an abrasive album that wears its raw emotions openly, a scathing exegesis on guilt, failure and self-doubt.
"To me, they were the noisecore Black Flag," Black Army Jacket guitarist Andrew Orlando said. "Lifetime of Gray Skies is a perfect record. I listen to it frequently and still love it. Anodyne went for it on tour and on record; they should be respected and remembered more."


Lifetime of Gray Skies would not only be Anodyne's epitaph, but it still stands as one of the proudest musical milestones in Hill's prolific career.
"That still to this day stands as one the proudest things I've done musically," he said. "That's a good note for the band to go out on. Everyone was maxed out on their abilities in the band. We were all open to different ideas of what we wanted to do musically. It was sort of an aggregate for everything we've done prior to that. Emotionally, to me, I was going through this real period. That record was recorded during that period of emotional duress and hard times and uncertainty and all that kind of stuff. All that stuff that leads to records sounding like that." 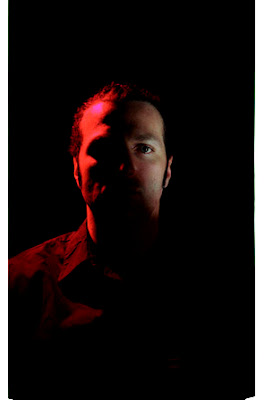 Lifetime of Gray Skies found Hill delving deep into his own fears and failures to fuel Anodyne's blistering attack on hardcore and noise rock. But it's also a lyrical high point as he addresses head on many of the themes he had wrestled with his entire musical career, particularly feelings of guilt.
"The way I write lyrics in Tombs is more esoteric and not diary or biographical. It's conceptual. Back in Anodyne a lot of the lyrics came out of journal entries, constantly writing a lot of the stuff I was going through relationship-wise, life stuff," Hill said. "Every day on the road I'm failing someone else somehow because I'm not around to be there for them or I'm not around to fulfill some expectation they had. I'm not saying that's reality, but that's the perception of reality I had. There are some very real personal failures I had that came through in the lyrics. That's huge. Especially Lifetime of Gray Skies was one the most confusing points in my life, relationship-wise. That's where the lyrics came from, trying to get through that shit, taking it one day at a time, trying to get through the traumatic bullshit I've inflicted on people or had people inflict on me."

Anodyne ground to a halt in 2004; burnt out and musically spent, the trio realized the band had run its course.
"I feel like, maybe subconsciously, we were kind of tapped out," Hill said. "Our musical interests were diverging. We didn't have that singular vision any more. For me, personally, maybe getting away from doing super technical music and trying to do more emotional music, something slower, something more textural. [Scott and Stallings] were probably going more for what they were doing for Defeatist."
Anodyne always intended to write more, but the band that used to rehearse for hours on end would go weeks without penning any new music. When they did write, "it wasn't like that compelling element. We agreed that's cool but maybe this isn't what we want. Everything was shifting and maybe it was time to call it a day on the band," Hill said.
Hill was starting to write more straightforward, textural music--presaging his work with Versoma and Tombs--while Stallings kept pushing the band to play faster and more technical material.
"I had a tendency to go overboard with this at times," Stallings said. "I think our approaches were clashing. There were also some personal tensions developing, just from spending so much time in a van together and Mike and I living together."
For the first time in Anodyne's history, the music just wasn't flowing and practices were becoming more frustrating than cathartic for the band. Scott said the trio was able to craft bits of songs but nothing that cohered into completed material.
"Once we returned from the U.S. tour in summer ’04, we tried to write new songs.  It was the first time we didn’t have a coherent (though unstated) direction," he said. "Practices were frustrating and fruitless. We wrote parts of songs, but by this point I think Joel and I were heading in a different direction than Mike and we couldn’t get anything to work. I met with Mike on July 4th and told him I wasn’t feeling the new stuff, and that my frustrations were mounting. He felt the same way. We discussed it for several hours and I decided I no longer wanted to do it. We met with Joel a day or two later and decided it would be best to just end the band, instead of replacing me and going on. It was weird, as is ending anything you’ve been doing for seven-plus years, but totally amicable."
"A band meeting was called, and they informed me that they’d discussed it the night before, and we were hanging it up," Stallings said. "I agreed that this was better than forcing something that was no longer coming naturally. Cancelling the next European tour was a drag for all of us, but obviously there was no way around it."
Anodyne had booked their second European tour, but the band's hearts just weren't in it at that point. Rather than strain the band further, Anodyne canceled the string of shows and went their own way without any grand announcements and prolonged farewells.
"We could do the tour and it could be our last tour or we could not do the tour," Hill said. "The last thing you want to do is go on a long 30 day tour and know that this is it, and I'm not so into this anymore."
Posted by Andrew Childers at 7:29 AM

Great piece. I especially liked the samples throughout the band's history. The songs on this album are definitely the best. The drummer is fucking phenomenal.

I had a hard time finding songs from it, but here's a few youtube links for anyone interested: http://youtu.be/txlarm_4T6A
http://youtu.be/GmO0rw88PBg

THANK YOU! sound cloud refused to let me upload songs from the last couple of albums even though i could prove i have the band's permission. i couldn't find anything on youtube. those must be recent additions.